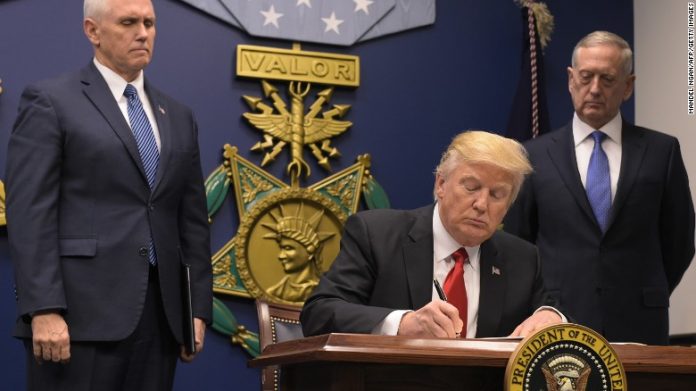 WASHINGTON – The Trump administration filed court papers Friday hoping to salvage its second version of a travel ban, after two judges in separate cases this week found it likely violated the Constitution.

Earlier this week, federal judges in Hawaii and Maryland issued orders against the travel ban, finding it violated the First Amendment by disfavoring a particular religion. If the Justice Department had appealed the Hawaii order , the case would have gone to the same San Francisco-based appeals court that rejected an earlier version of the travel ban.

The First Amendment prohibits any “law respecting an establishment of religion,” meaning the government must remain neutral between religions – or between religions and non-religion – and not favor or disfavor a particular faith.

Critics of the executive order call it an attempt to fulfill President Donald Trump’s campaign promise to temporarily ban Muslims from entering the United States. The administration denies it is a Muslim ban, and says the order aims to prevent terrorism by suspending visitors from terror-prone countries where screening of individuals seeking U.S. visas may not be effective.

In response to the legal setback, the White House crafted a new version that dropped Iraq from the list of countries and exempted holders of valid visas and green cards.

But the new version also quickly ran afoul of the courts.

In Hawaii, U.S. District Judge Derrick Watson’s 43-page ruling used the public statements of the president and his senior advisors to conclude there was a “strong likelihood of success” that opponents of the travel ban would be able to prove the executive order ran afoul of the Constitution.

“A reasonable, objective observer – enlightened by the specific historical context, contemporaneous public statements, and specific sequence of events leading to its issuance – would conclude that the Executive Order was issued with a purpose to disfavor a particular religion,” the judge wrote.

Trump, speaking at a rally in Nashville shortly after the judge’s decision, insisted he wouldn’t back down.

“We’re going to fight this terrible ruling,” he said, to applause from the crowd. “We’re going to take our case as far as it needs to go, including all the way up to the Supreme Court.”

The Justice Department has said it will continue to defend the president’s order in court.

In the Maryland case, U.S. District Judge Theodore Chuang wrote that the origins of the travel ban suggests that religious screening, not national security, was the primary purpose.

“The fact that the White House took the highly irregular step of first introducing the travel ban without receiving the input and judgment of the relevant national security agencies strongly suggests that the religious purpose was primary, and the national security purpose, even if legitimate, is a secondary post hoc rationale,” the judge wrote.