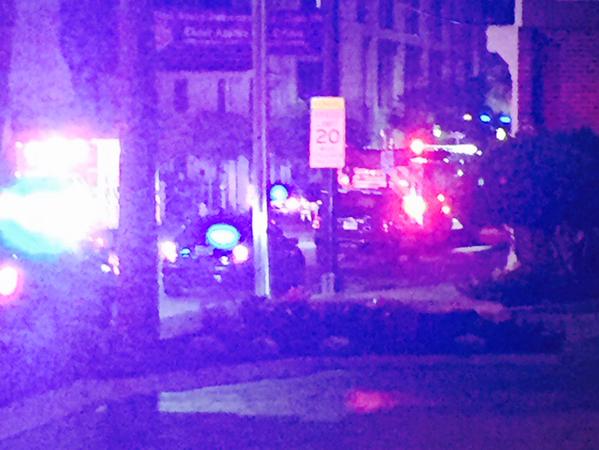 9 people were found dead inside the church.

The shooting took place at about 9 p.m. ET, and the gunman is still on the loose, as far as we know.

The scene is at the Emanuel African Methodist Episcopal Church.

Police are looking for the gunman and helicopters are hovering above. Police spokesman Charles Francis described the suspect as a 21-year-old white male in a grey sweatshirt/hoodie and jeans with Timberland boots. He has a slender build.

Soon afterward, police took a man matching that description into custody but it’s unclear if he was the shooter.

CPD officials have not released any information yet on any victims.

Pictures and video from the scene show the fire department and ambulance crews have responded.

At least six ambulances were spotted in the area of the shooting.

Every Wednesday evening, the church holds a Bible study in its basement, according to Fox8.

It was burned to the ground at one point, but rebuilt.

Every Wednesday evening, the church holds a Bible study in its basement.

The shooting was “obviously the most intolerable and unbelievable act possible,” the mayor said.

“People in prayer Wednesday evening. A ritual, a coming together, praying, worshiping God. An awful person come in and shoot them is inexplicable,” Riley said.

From 13NewsNow: — “A woman who answered the telephone at the Charleston Police Department late Wednesday said she’d heard nothing about a shooting, but tweets from Boughton indicate there is law enforcement activity downtown indicative that a shooting has taken place.
An emergency medical worker told people on the street to “drive far away or to go indoors,” Boughton tweeted at about 9:45 p.m. EDT.” —