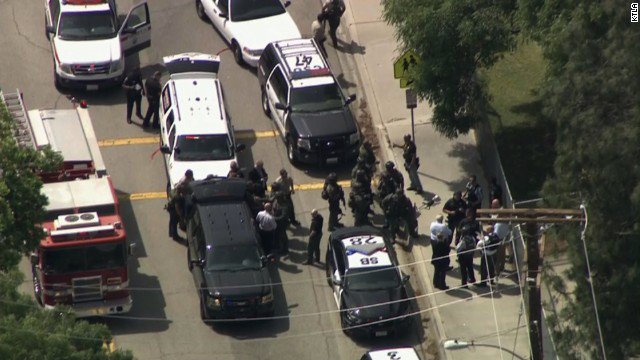 Two adults are dead and two others, possibly students, have been wounded in a shooting at an elementary school in Southern California, police said.

San Bernardino, California, police chief Jarrod Burguan said in a series of tweets Monday afternoon that officers were responding to Northpark Elementary school after a shooting inside of a classroom that he said was likely a “murder-suicide.”

“However, we do believe the threat is down,” Burguan said.

The police chief initially said that four victims, one a teacher, were being treated and that the suspect was “possibly down.”

He said two students had been transported to a nearby hospital and other students were being taken to Cajon High School for safety.

There were 385 mass shootings in the United States in 2016, according to the Gun Violence Archive, which compiles such incidents. The organization defines a mass shooting as an single shooting incident in which four people are killed or injured, including the gunman.

There have been 219 School Shootings in the United States since 2013, according to Everytown for Gun Safety, a group that tracks gun violence in the U.S. The group reports that, on an average day in the U.S., seven children and teenagers – age 19 or under – are killed with guns.

North Park Elementary enrolls about 530 children, the majority of whom are Latino and three-quarters of whom are poor, according to data from the San Bernardino City Unified School District.

Preliminary info is 4 victims, being treated. Suspect is possibly down as well.