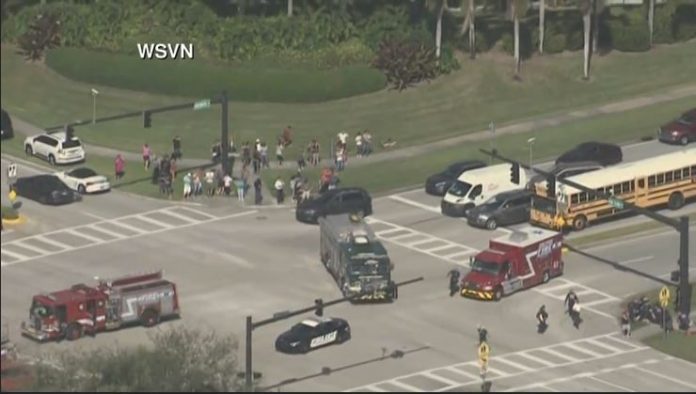 FLORIDA — Authorities say there has been a shooting at Marjory Stoneman Douglas High School in Parkland.

According to local media, 20-50 people are wounded—At least 1 person is dead.

The shooter, who is believed to be a student, fled on foot but was later captured.

There was a massive police response, including a SWAT team. The FBI and ATF are also responding.

The school was placed on lockdown. Although, students and staff were seen fleeing from the building.

President Donald Trump “has been made aware of the school shooting in Florida. We are monitoring the situation. Our thoughts and prayers are with those affected,” the White House said.

Video posted online appeared to show the chaotic scene inside a classroom.

#BSO is working a developing incident regarding a report of active shooter located at 5901 Pine Island Rd, Parkland. Here’s what we know so far: deputies are responding to reports of a shooting at Stoneman Douglas High. There are reports of victims. PIO will be on scene 3:15pm.

Avoid the area of Stoneman Douglas HS. #BSO is currently working a developing incident regarding a report of active shooter.