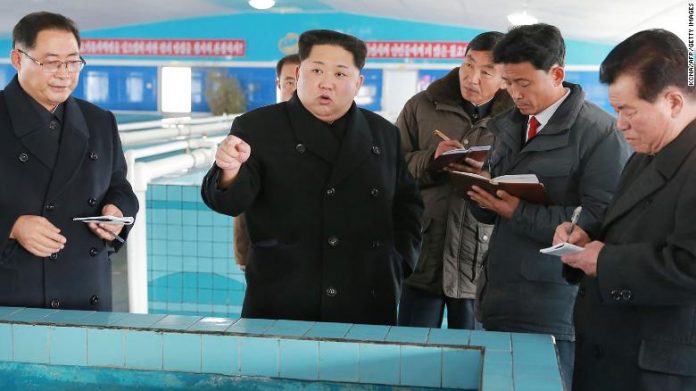 North Korea fired a ballistic missile from the South Pyongan Province Wednesday, according to officials in South Korea. The United States government has also confirmed the news.

The Japanese government estimates the North Korea missile flew for 50 minutes and landed in Japan’s exclusive economic zone. The Pentagon says the initial assessment of the launch was an Intercontinental Ballistic Missile—The ICBM flew roughly 2,800 miles into space, the highest missile test to date. (NASA’s international space station orbits earth only 250 miles from the earth’s atmosphere.)

President Trump was briefed on the launch while the missile was still in the air, the White House said.

JUST IN: President Trump: “A missile was launched a little while ago from North Korea. I will only tell you that we will take care of it….” pic.twitter.com/m1gGtx3Krn

The U.S. Department of Defense detected and tracked a single North Korea missile launch today at about 1:17 p.m. EST. Initial assessment indicates that this missile was an intercontinental ballistic missile (ICBM).

The missile was launched from Sain Ni, North Korea, and traveled about 1000 km before splashing down in the Sea of Japan, within Japan’s Exclusive Economic Zone (EEZ). We are working with our interagency partners on a more detailed assessment of the launch.

The North American Aerospace Defense Command (NORAD) determined the missile launch from North Korea did not pose a threat to North America, our territories or our allies.

Our commitment to the defense of our allies, including the Republic of Korea and Japan, in the face of these threats, remains ironclad. We remain prepared to defend ourselves and our allies from any attack or provocation.

Several missile tests have been conducted by North Korea throughout 2017.

On September 15, North Korea fired a Hwasong-12 missile over Hokkaido, Japan, for the second time. The missile traveled 3,700 kilometres (2,300 mi) and reached a maximum height of 770 kilometres (480 mi); this was the furthest distance any North Korean IRBM missile has ever reached.