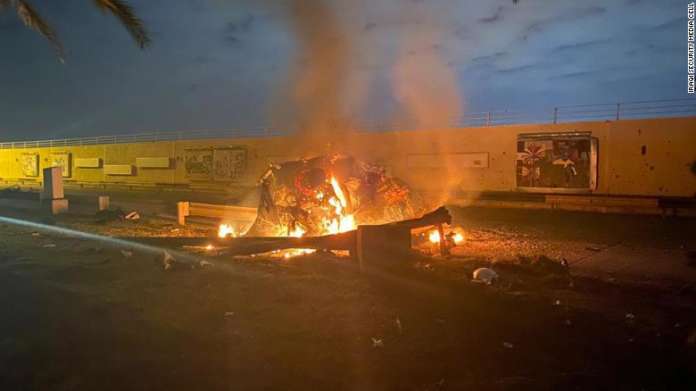 BAGHDAD — Qasem Soleimani, Iranian Major general of the Islamic Revolutionary Guard Corps (IRGC) and his Deputy General, have been killed in a United States airstrike at the Baghdad International airport, the Pentagon confirms. An engineer was also among those killed.

The Department of Defense said in a statement, “At the direction of the President, the U.S. military has taken decisive defensive action to protect U.S. personnel abroad by killing Qasem Soleimani, the head of the Iranian Revolutionary Guard Corps-Quds Force, a U.S.-designated Foreign Terrorist Organization.

General Soleimani was actively developing plans to attack American diplomats and service members in Iraq and throughout the region.

He had orchestrated attacks on coalition bases in Iraq over the last several months – including the attack on December 27th – culminating in the death and wounding of additional American and Iraqi personnel.”

An unknown number of rockets struck at least two vehicles belonging to the Popular Mobilization Forces that were transporting the high ranking officials.

Initial reports say seven people were confirmed killed but the number could rise as the vehicles and bodies were badly charred.

Is it the same ring or similar? Asking for expert opinion #Iraq , this is Qassim Sulaimani the Iranian leader of Quds force #Baghdad pic.twitter.com/Xe4viCWKXY

The attack comes after the U.S. Embassy in Baghdad was targeted Tuesday by mobs who were retaliating against recent U.S. airstrikes.

President Trump said on Twitter that the embassy attack “will not be a Benghazi.”

Israeli forces have been placed on the highest alert possible on fear of Iranian retaliation against the United States ally.

After the news broke of Soleimani’s death, President Trump tweeted a photo of the American Flag with no caption.