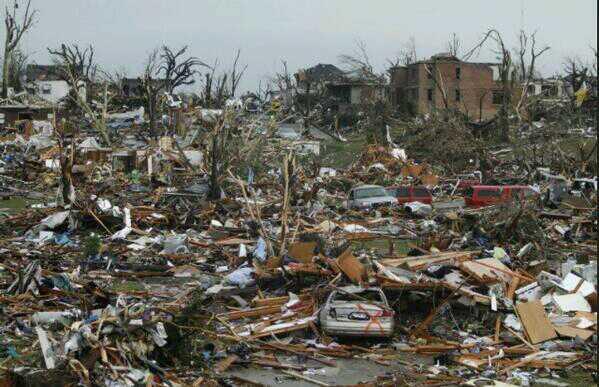 UPDATE 9:20PM EST: Officials say they have confirmed that the death toll has climbed to five after a string of tornadoes that hit central and southern Illinois. Patti Thompson of the Illinois Emergency Management Agency says the latest two deaths occurred Sunday in Massac County in far southern Illinois. She says she does not have any further details. 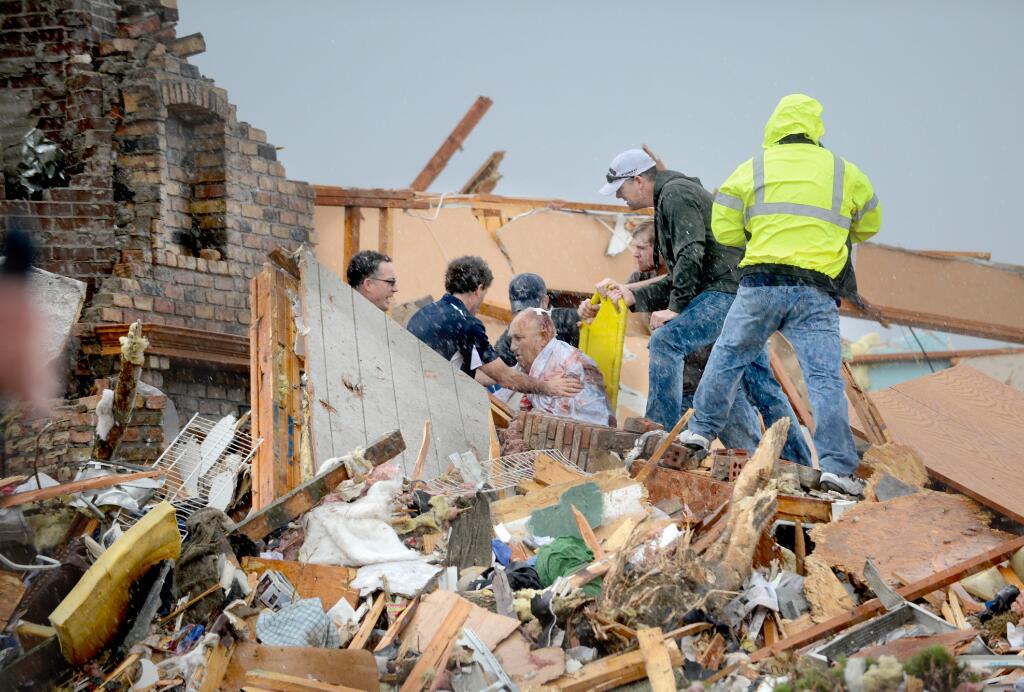 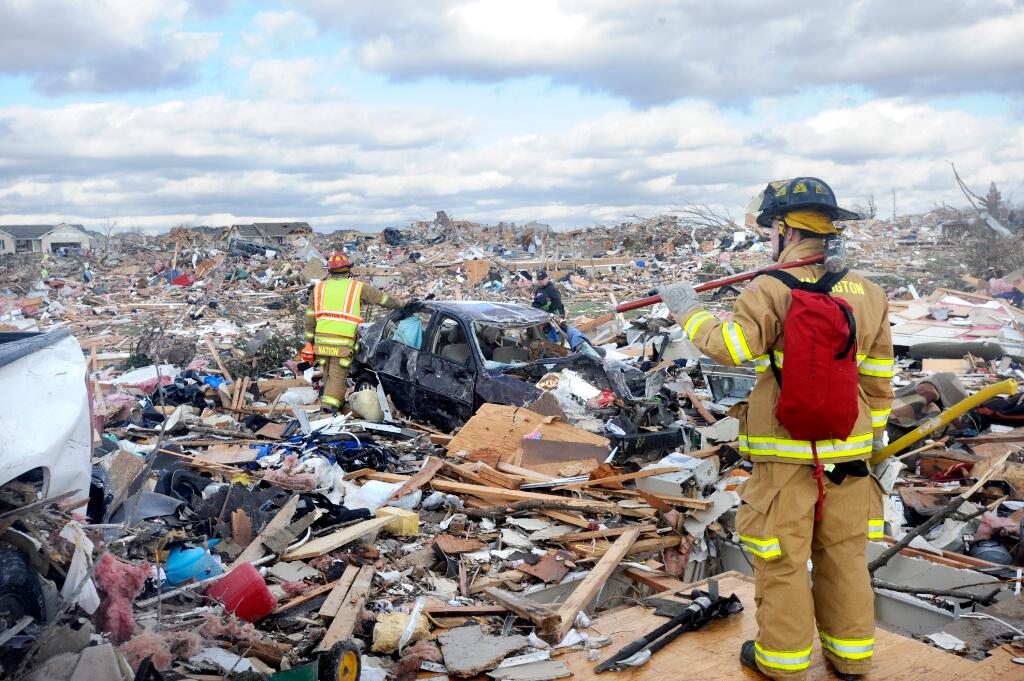 UPDATE 4:00PM EST: Confirmed large and extremely dangerous tornado on the ground 8 miles west of Bedford…seek shelter immediately if you live in area via @WHAS11Kristin. 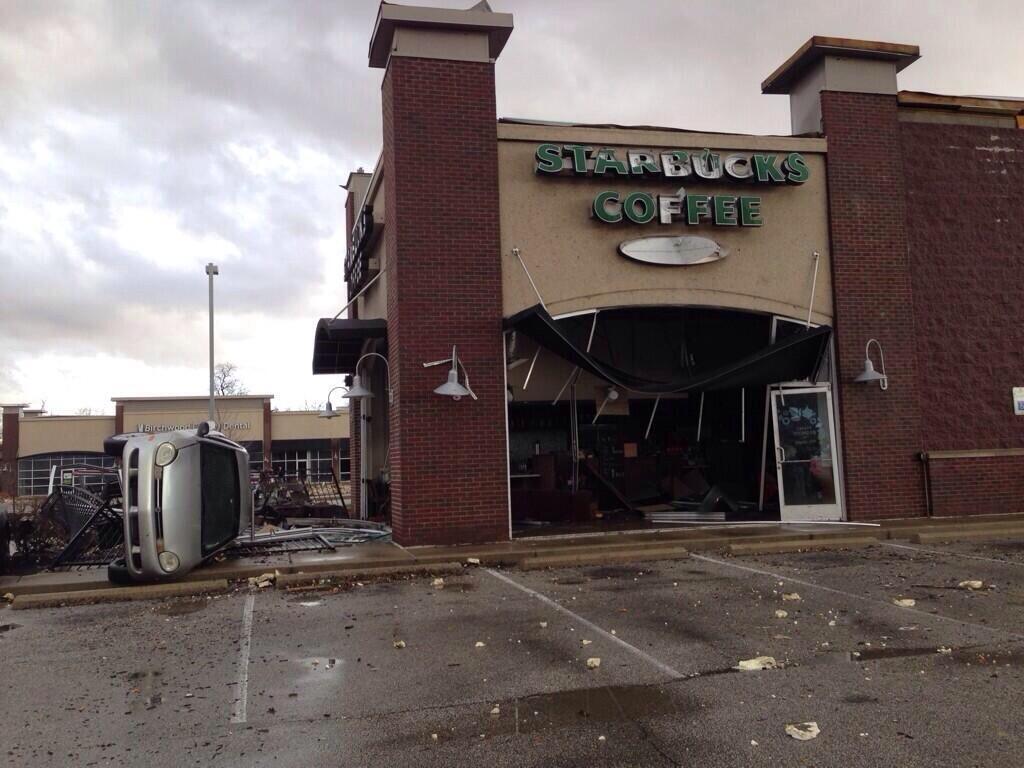 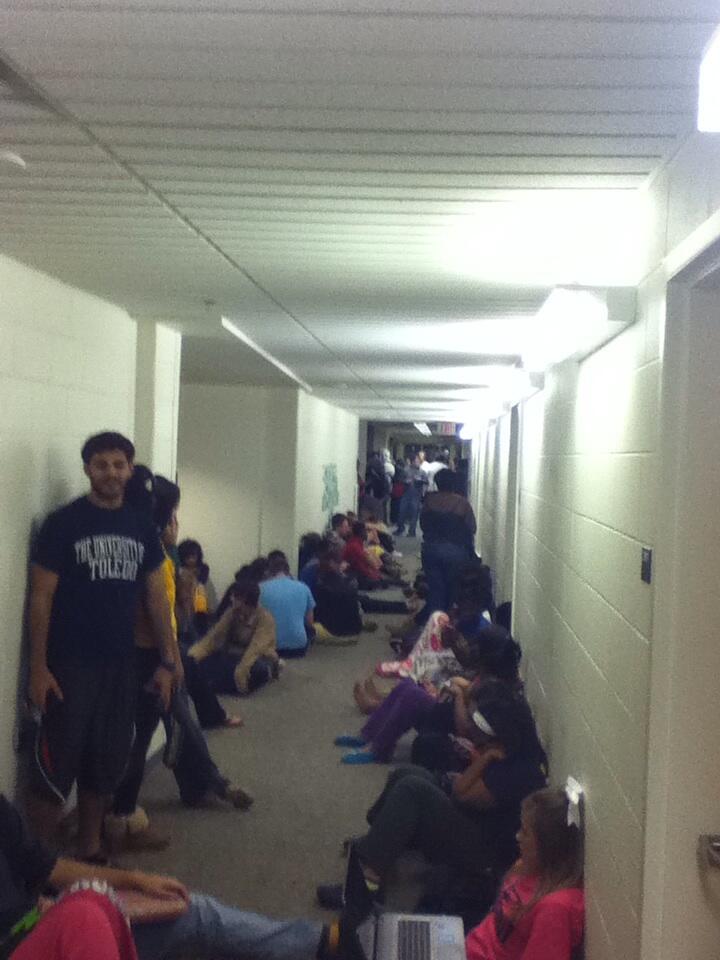 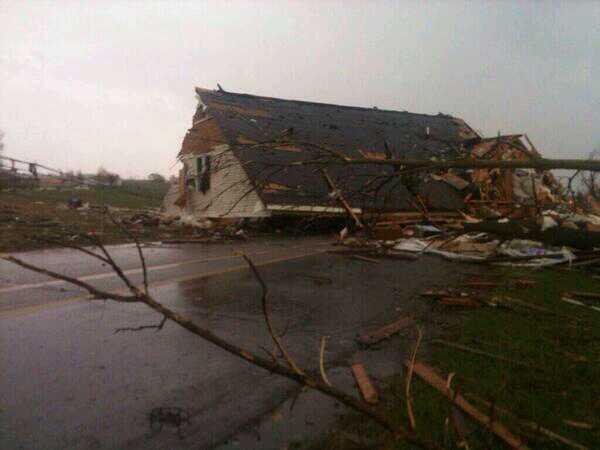 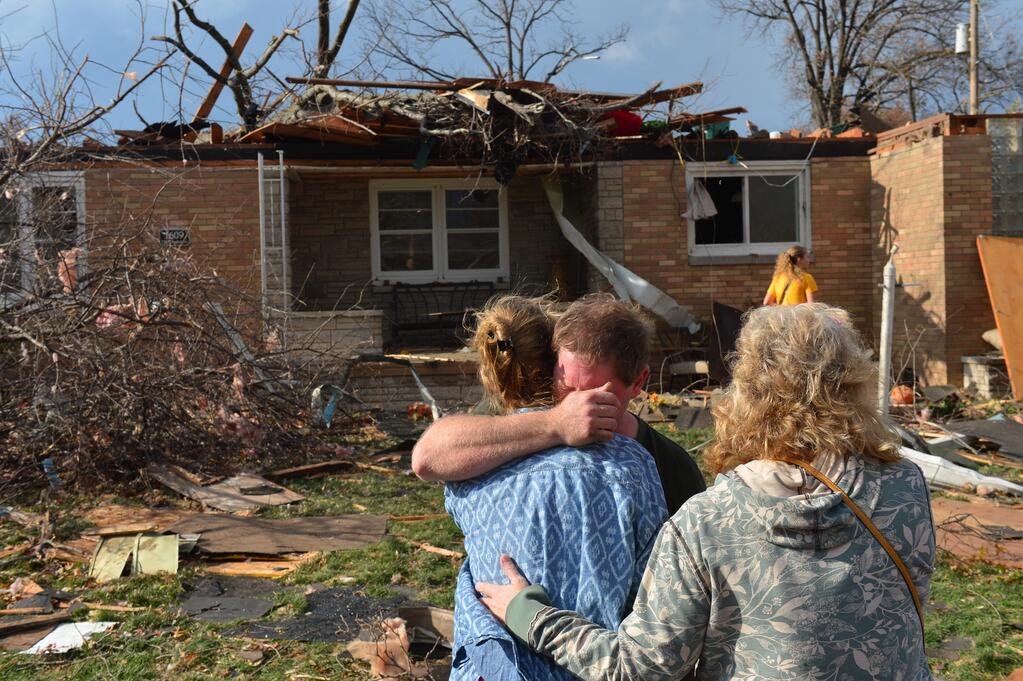 UPDATE 3:38PM EST: Tornado on the ground 7 miles SW of Kokomo, IN, heading toward Kokomo and Elwood, IN

UPDATE 3:00PM EST: The storm system that moved into the Chicago-area this morning has begun to move out, leaving in its wake several tornado touchdowns, lots of rain with some flooding, considerable wind damage from gusts that reached as high as 70 m.p.h., and the rare postponement of a Bears game.

As of about 1:30 p.m., all of the National Weather Service tornado warnings for the immediate Chicago region had expired, though tornado watches, flash flood watches, and wind advisories remained in effect. Some tornado warnings were still in effect throughout the eastern part of the state, but not Chicagoland. 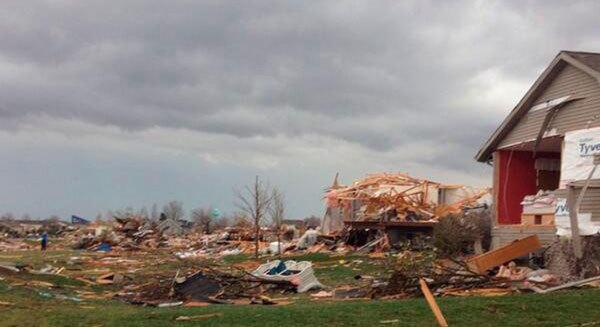 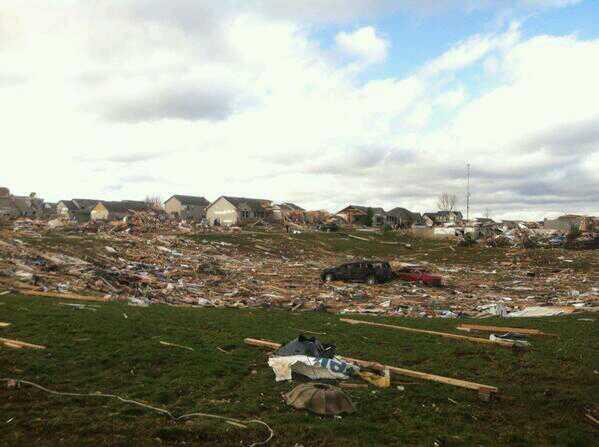 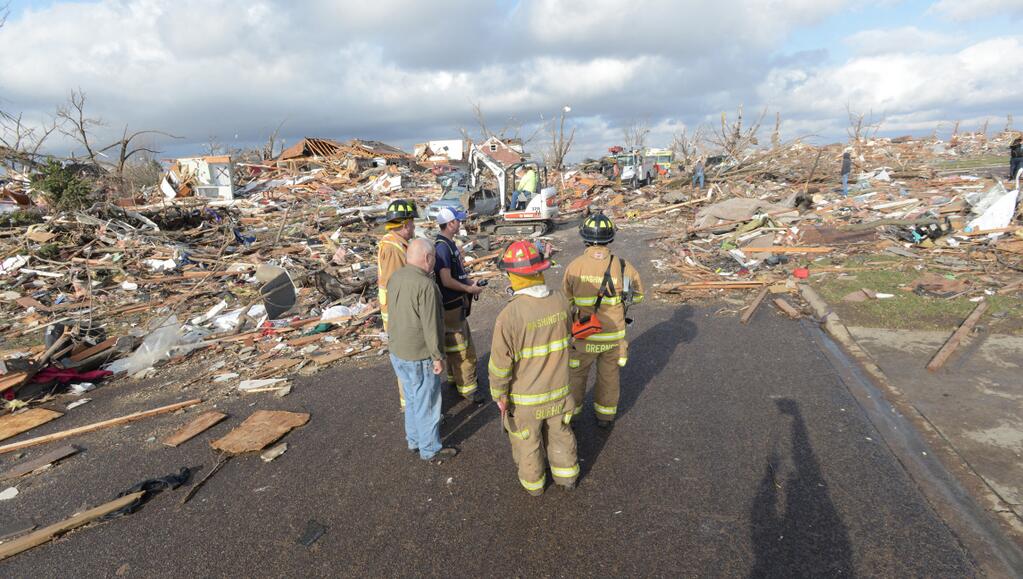 UPDATE 2:38PM EST: The Peoria Journal Star reports that tornadoes touched down in the towns of Washington and Pekin outside Peoria. In Washington, authorites erected a shelter at Cherry Tree Shopping Center, and the injured were being taken to the Washington Fire Department. The Georgetown Commons apartment complex was severely damaged and other areas were hit hard. Authorities were doing a house-to-house search. Parts of the town were being evacuated.

Several homes were damaged in Pekin and rescue efforts were underway, according to Pekin officials. 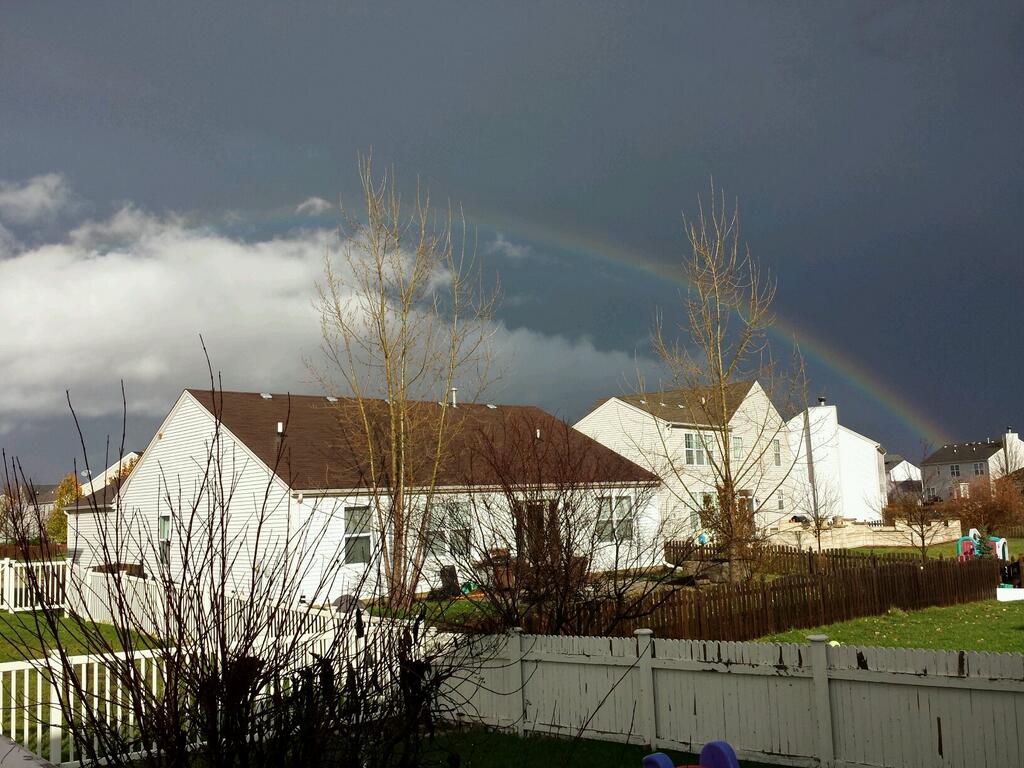 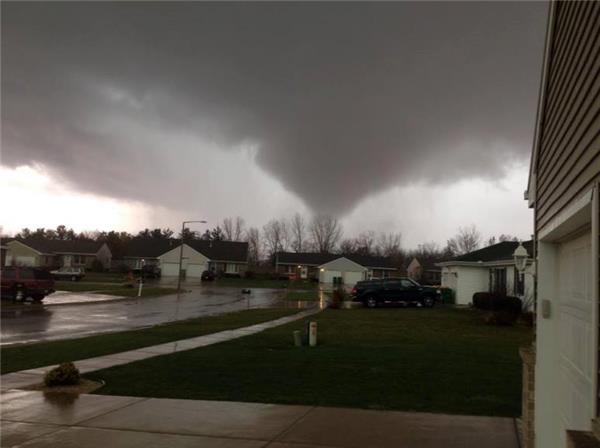 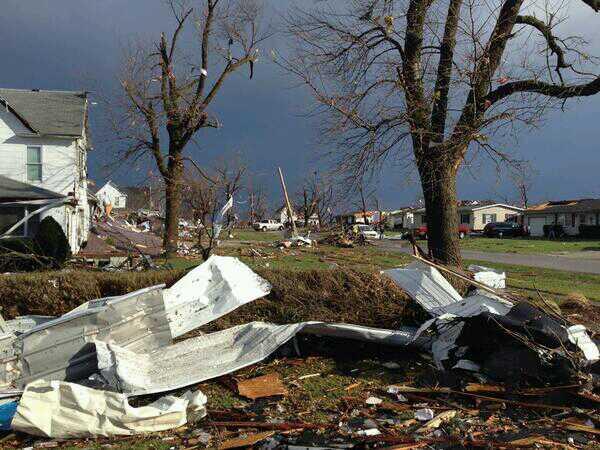 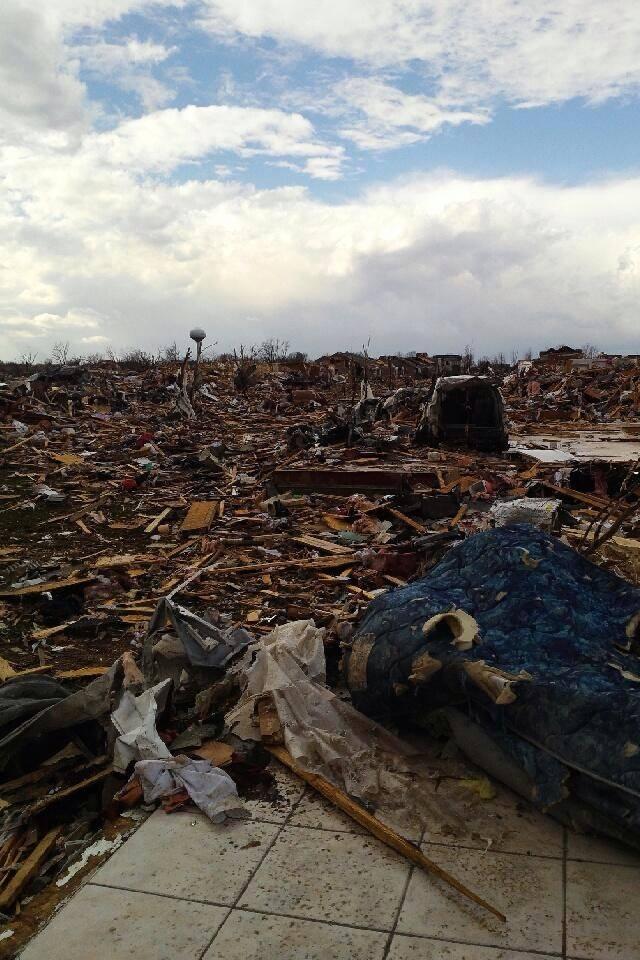 UPDATE 2:00PM EST: Tornado ON THE GROUND near Frankfort, moving N/E at 60 mph. Areas in the path of this storm take cover now.

UPDATE 1:40PM EST: The tornadoes that ripped through central Illinois have begun to land in Chicago’s southwest suburbs, and the storm system that spawned those twisters led to the decision to pull players and fans from Soldier Field at today’s Bears game..

UPDATE 1:35PM EST: The storm system that led to the formation of a “large and extremely dangerous” tornado that ripped through central Illinois is taking aim on Chicago’s southwest suburbs. The National Weather Service has issued a tronado warning until 1 p.m. for Frundy County, northwest Kankakee County and westerbn Will County. Communities at risk include Elwood, Manhattan, Coal City, Wilmington and Braidwood, and the agency is asking people to “take cover now.”.

FIRST REPORT: The weather service has confirmed that a “large and extremely dangerous” tornado had touched down in central Illinois and is moving northeast at 55 m.p.h. in the direction of Streator, a community in LaSalle County about 100 miles southwest of Chicago. The agency said that the situation is “life threatening.” That tornado is expected to hit Streator about 11:55 p.m.

The tornado watch is in effect until 4 p.m. for all of the Chicago metropolitan area, Izzi said. The area at risk includes the entire city of Chicago and notably Soldier Field, where the Bears are scheduled to play the Baltimore Ravens at noon, right about the time the storms should be at their worst. It also extends to all of Illinois, southern Wisconsin and northwest Indiana until 4 p.m.

The storms are getting closer to Chicago. The weather service has issued a severe thunderstorm watch until 11:30 a.m. for DuPage County and for parts of Kane, Kendall, Grundy and Will counties. 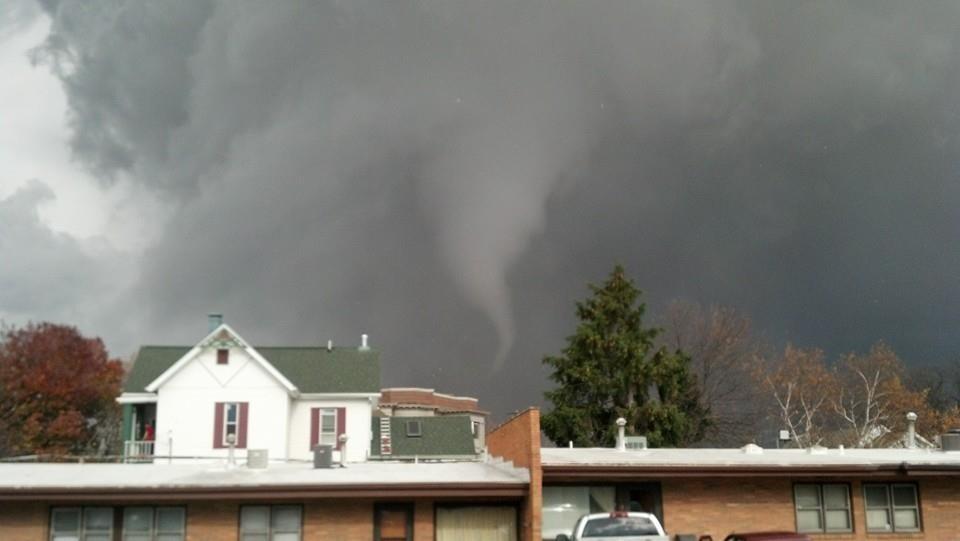 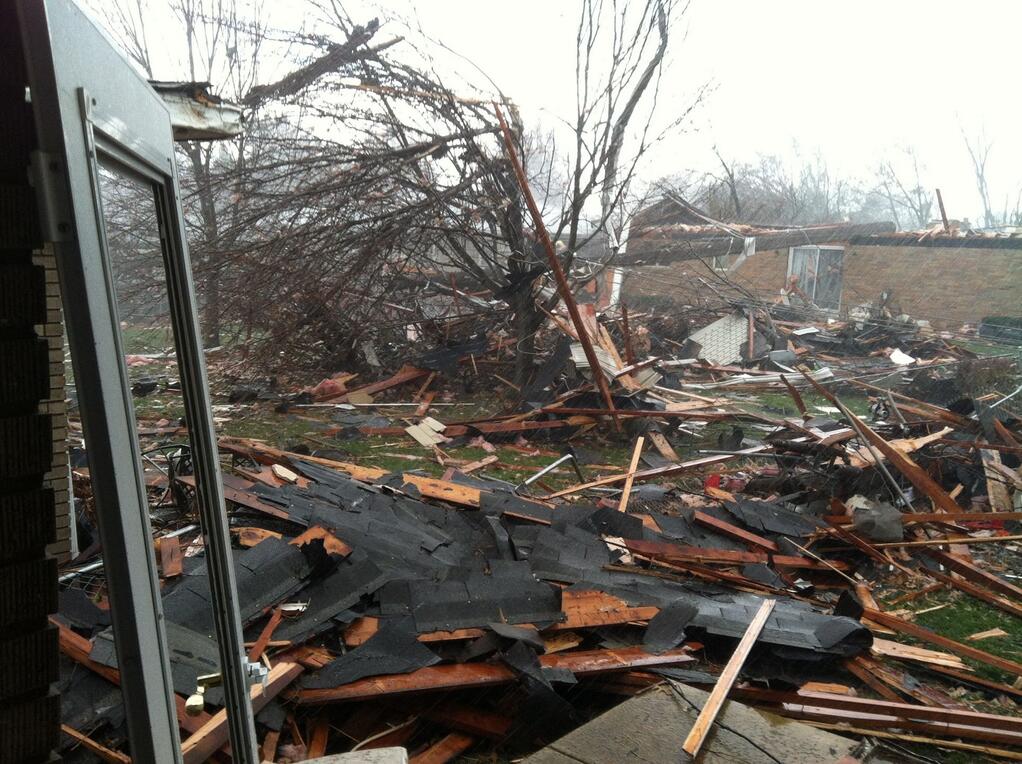 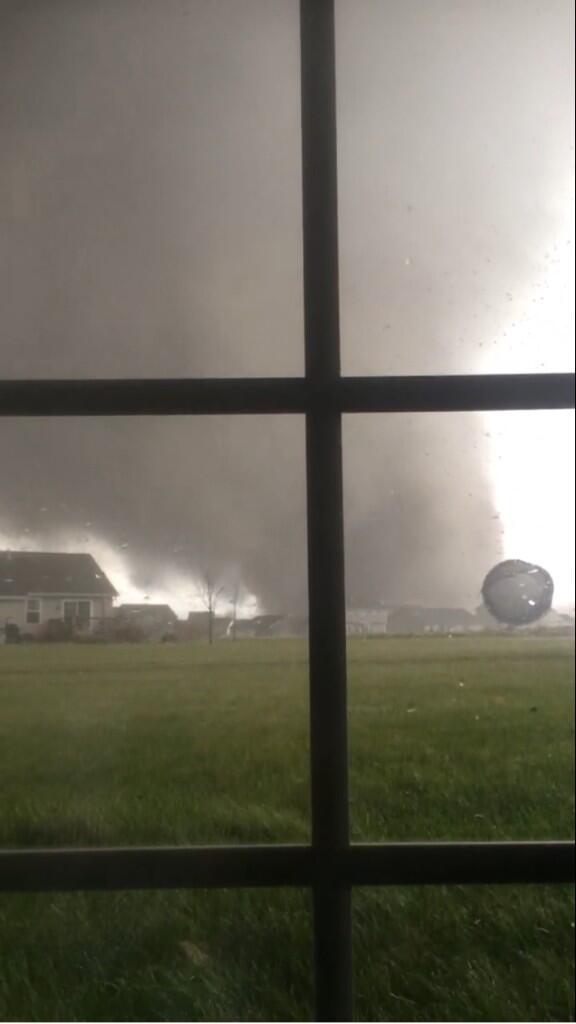 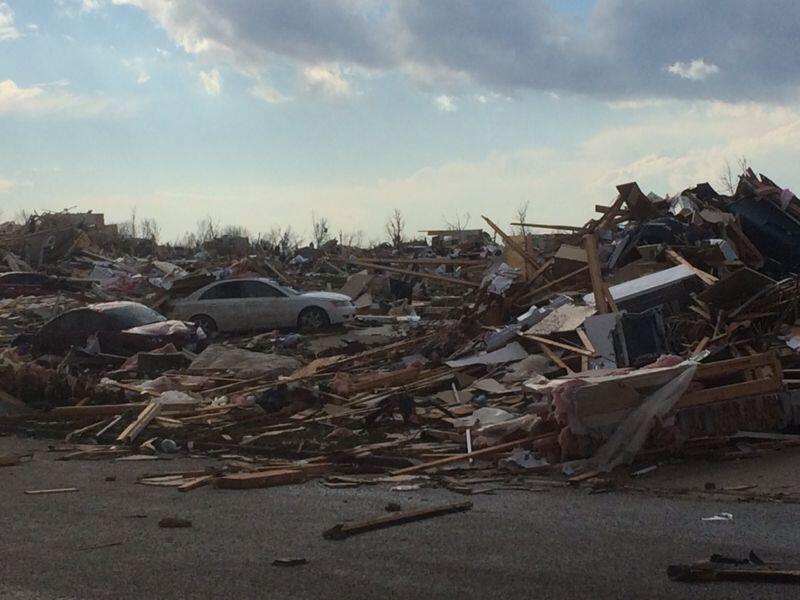 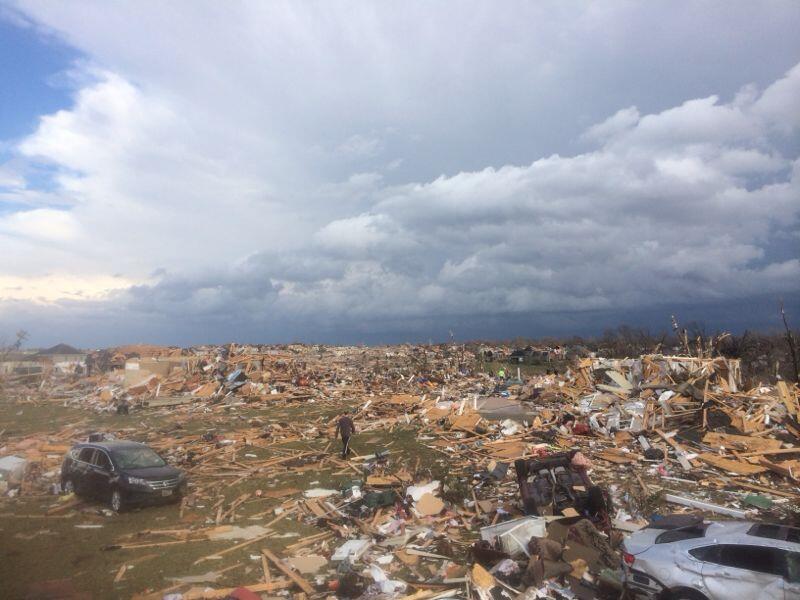 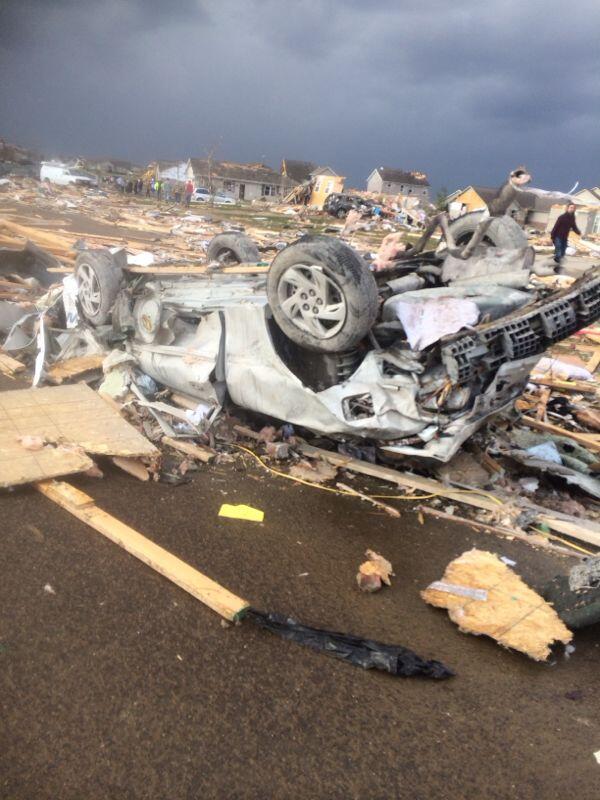 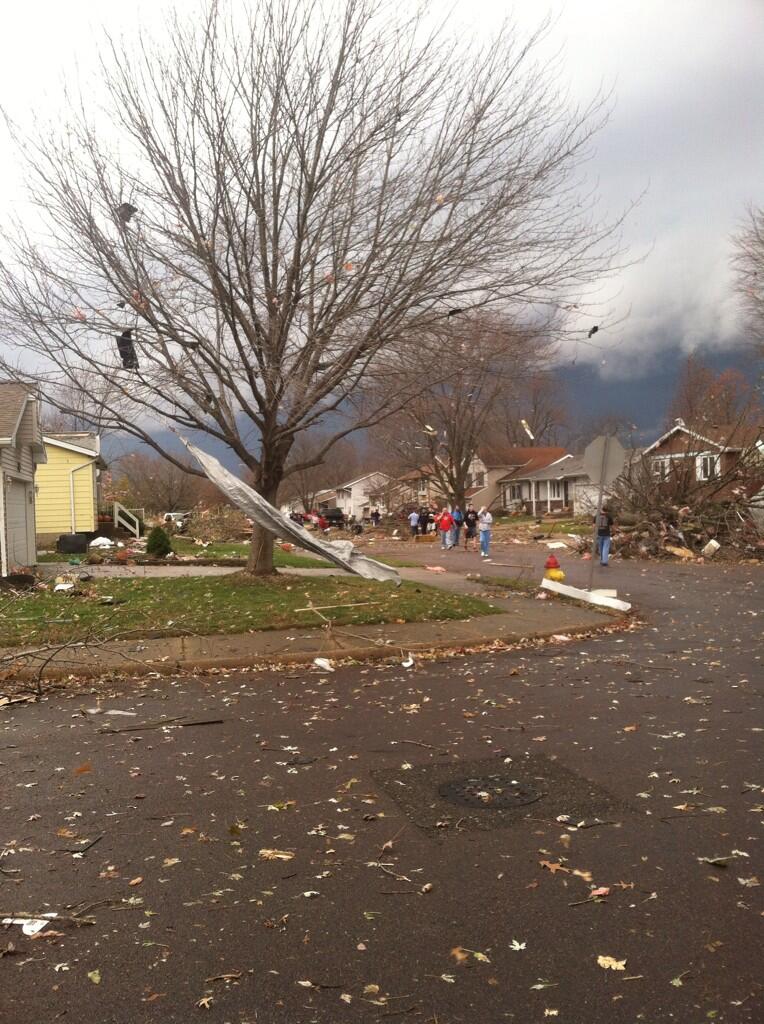 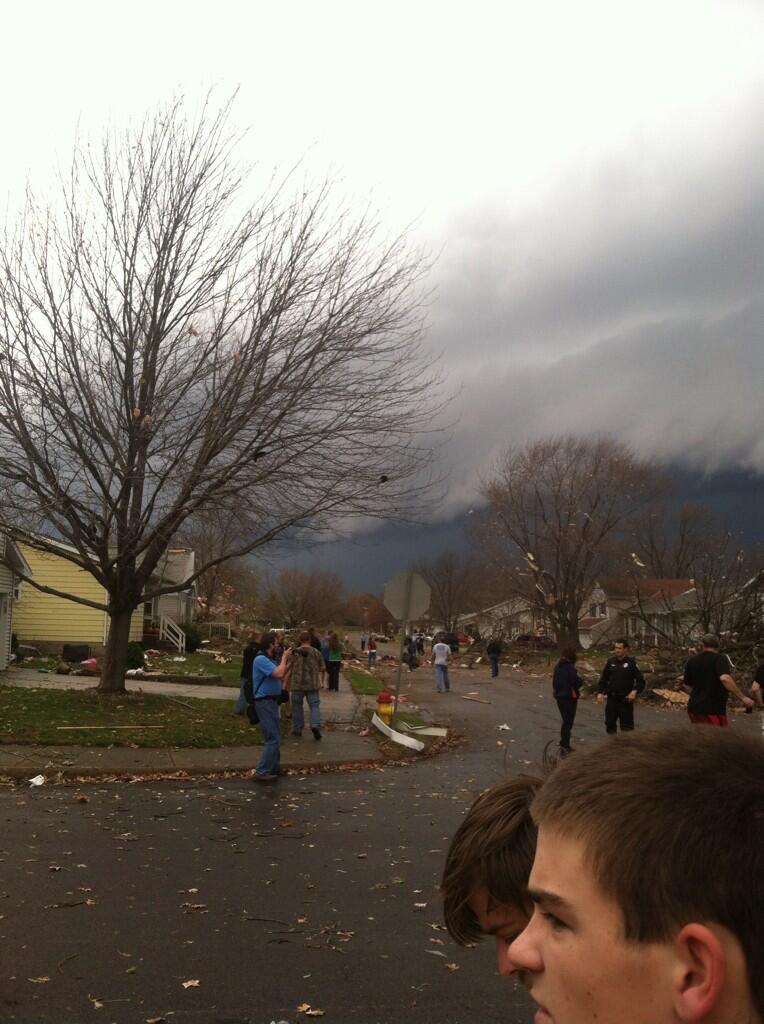 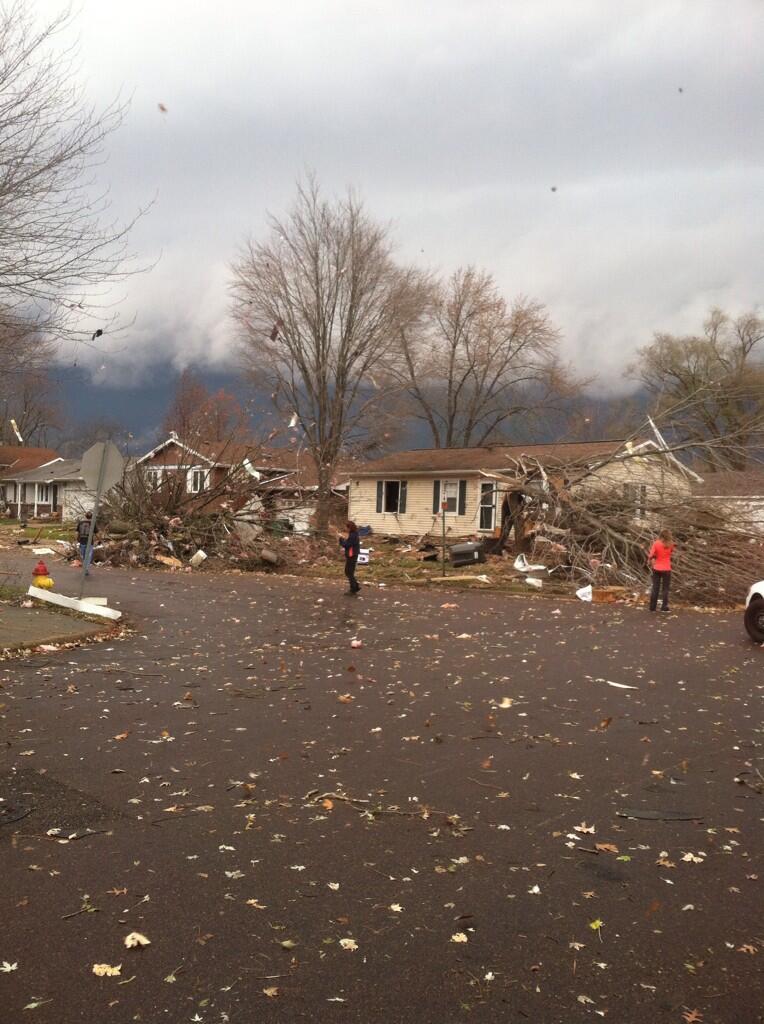 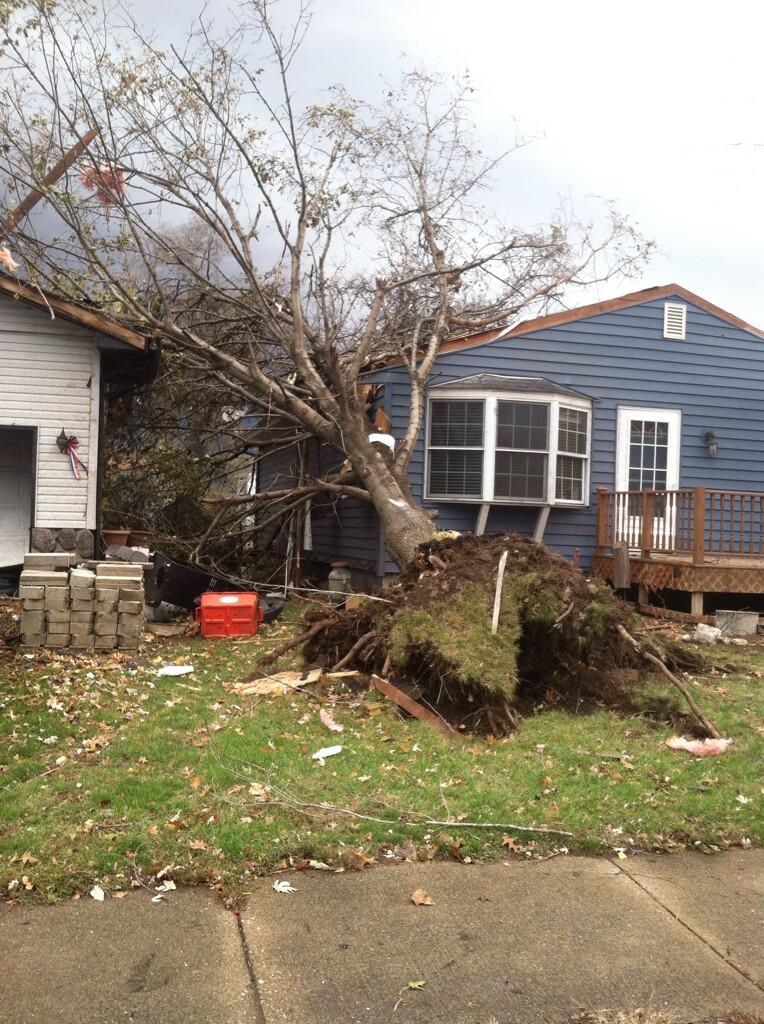 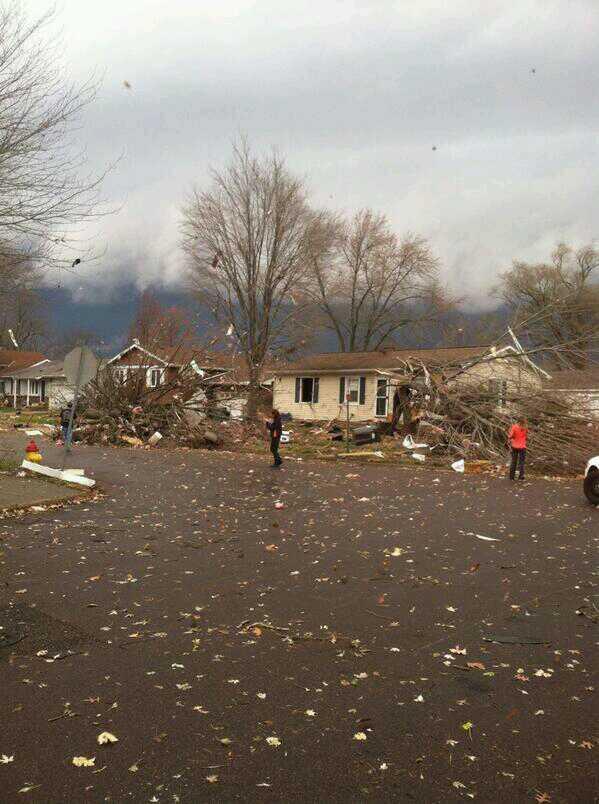 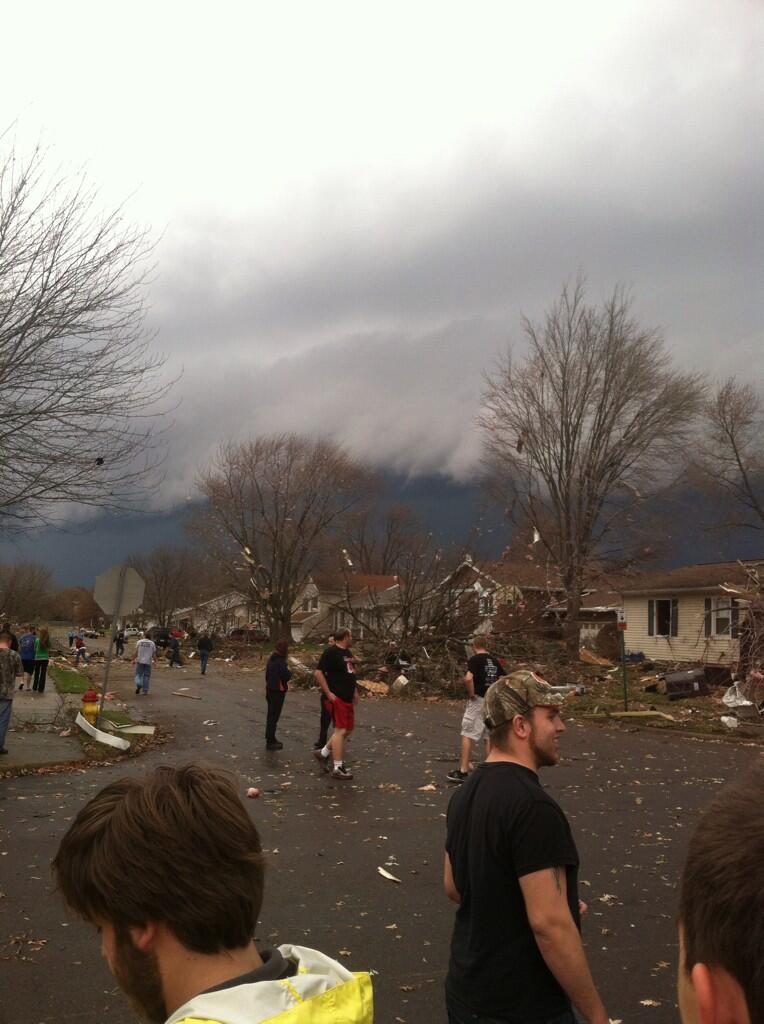 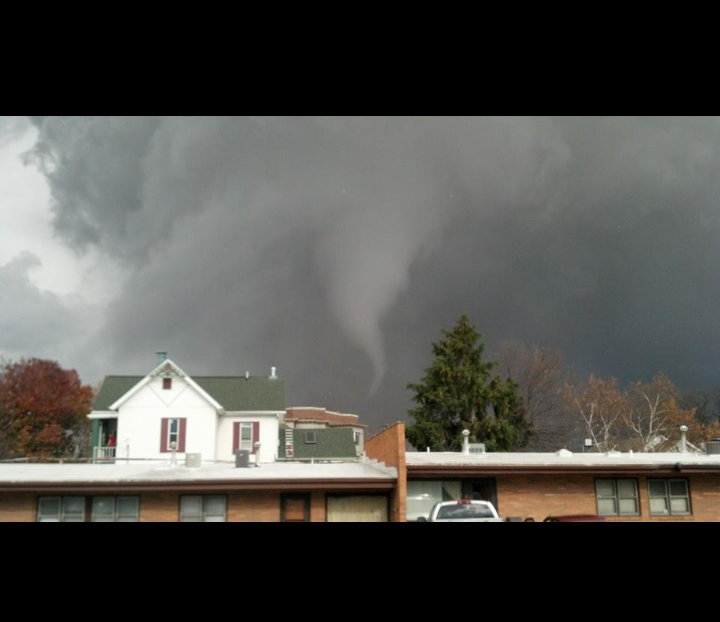