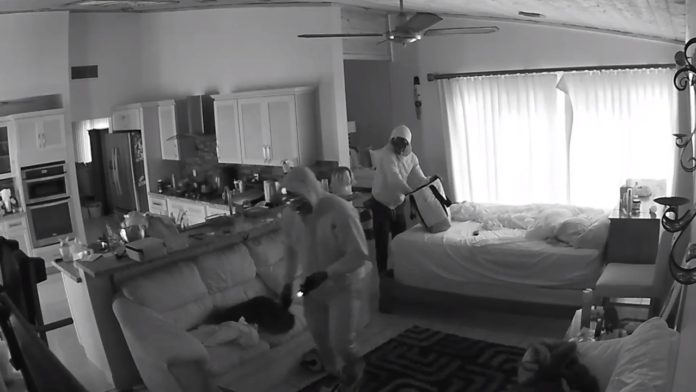 At approximately 9 a.m. Oct. 26, the victim was leaving her residence when two male subjects, dressed in all black and armed with weapons, exited a 2019 or 2020 white Lexus SUV NX300 F Sport model vehicle. The subjects approached the victim and forced her to escort them into her residence at gunpoint. Once inside, the subjects then tied the victim up.

Surveillance video inside the home shows the two males rummaging through the victim’s belongings. While the subjects are inside the residence, surveillance video captures an unknown female wearing a dark colored hair wrap (possibly concealing dreads or braids) and dark colored clothing approaching the home. The female opens the door, says something in Creole, then closes the door before wiping the handle down with her long sleeve shirt and returning back to the awaiting car.

Cops say the suspects forced the victim into her home, tied her up and made off with items valued at approximately $2,700. pic.twitter.com/9tfwzNzUuS

Detectives say both male subjects appeared to be wearing dark colored, shiny, plastic skull masks. Anyone with information regarding the identity of these subjects is asked to contact BSO Robbery Detective Robert Sokol at 954-321-4547. If you wish to remain anonymous, contact Broward Crime Stoppers at 954-493-TIPS (8477) or online at browardcrimestoppers.org.