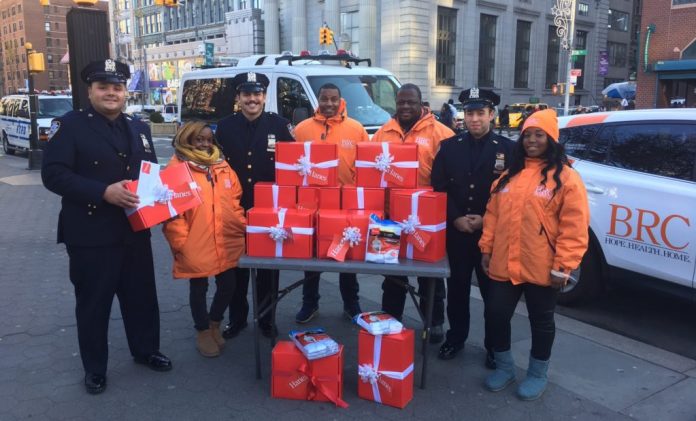 NYPD Transit Officers Frank Rendina and Mathew Spano had been patrolling the Grand Central subway station when they ran into Ron, a homeless man they have seen many times.

After speaking about a recent medical check-up, Ron mentioned that he could not afford a pair of compression socks that his doctor recommended. Officer Rendina told Ron that he would buy the socks he needed as an early holiday gift.

Unknown to the officers and Ron, a passerby captured the interaction and later posted it on his Facebook page, where it was shared hundreds of times. Officer Rendina made good on his promise a few days later, setting Ron up with a new pair of socks.

The Hanes clothing company heard of Officer Rendina’s kindness and was inspired to donate 500 pairs of socks to the NYPD for New Yorkers in need. On Friday morning NYPD Transit cops including Officer Redina were on hand outside the Union Square subway station to accept the clothing donation and to thank Hanes.

Socks are the most requested but least donated item of clothing at homeless shelters. We are proud to support @NYPDTransit in their efforts https://t.co/vzKbPsOL5N

“All it takes is one small act of kindness to inspire others to do the same,” said Chief of Transit Joseph Fox. “The generosity of Hanes meshes well with the Transit Bureau’s overall efforts to encourage homeless New Yorkers to get off the streets and into shelters where clothing and food are available, and where they can be put on a pathway to long-term housing placements.”

The officers turned the donation over to the Transit Bureau’s close partners at Bowery Residents Committee, who will get the clothing directly to where it is needed most.