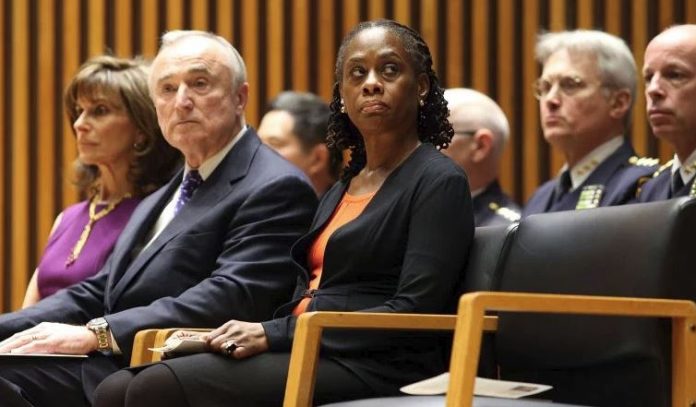 The massive shake-up in the NYPD is continuing on Thursday, as another 4 high ranking Chief’s were told to retire.

Just three days after four 3-star chiefs were forced out without any notice, sources confirm to Breaking911.com that NYPD Commissioner James P. O’Neill is reportedly prepared to fire as many as five 2-star chiefs.

One NYPD official told Breaking911.com that “MccRay wanted to replace the outgoing Chief of Department with an African American woman, and caused such a stir which led to the entire shakeup”, the source said.

The source added that “in response to her bickering”, Chief Rodney Harrison, was appointed as Chief of Patrol – making him the top African American uniformed member of the NYPD. But that move is being questioned by many insiders, as Harrison has no personnel experience, as he has never been a Boro Commander before. This is unprecedented in the Department.

Another move which raised eyebrows was the appointment of Deputy Chief Nilda Irizarry Hofmann to Chief of Community Affairs and the first Hispanic woman in the NYPD promoted to three-star chief. This move appears to be unprecedented as well, as she was given a double promotion – from 1 star to 3 stars at the same time. Surprisingly, she has no experience with community outreach before, and many are questioning why she out of all people was given this prestigious position.

MccRay is no stranger to controversy in the NYPD, as she has previously attended a high-level NYPD meeting known as “CompStat” in September 2014, where she listened in as top brass were grilled about crime under their commands. The unprecedented move caused eyeballs to roll and whispers to travel through the ranks of the Department at the time.

“The common denominator is that every chief forced into retirement is that they are all white”, another source said.

“It’s beyond comprehension that good clean hard-working 2 star chiefs are forced to retire for no good reason, while 2 star Chief Jeffrey Maddrey, an African American, simply lost 45 vacation days after a seven-year fling with a subordinate that ended with his alleged lover pulling a loaded weapon on him” he added.

According to a Daily News report, Former Police Officer Tabatha Foster is suing Maddrey and the city for $100 million, claiming she and he hooked up for years, getting busy in stationhouses and his police car.

Although MccRay is being accused by many, others are blaming Former Commissioner Bratton of orchestrating these moves from behind the scenes. Before Bratton was Commissioner, never were 3 Star Chiefs forced to retire. But under his watch, a total of three were forced out – despite not hitting their retirement age.

Under former Commissioner Ray Kelly, older Chiefs were respectfully moved into spots that didn’t require them to be as active, and made room for younger blood.

Current Commissioner O’Neill is allegedly taking advice from Bratton, and has decided to make the unprecedented decisions to force decades of experienced and seasoned Chiefs into retirement – with no explanation given.

Additionally, many are furious about the way people were forced to retire. “There was no warning that this was coming. We were called into Headquarters, and in 3 sentences were told we were unwanted.”

“Basically, Our thank you for the lowest crime reduction in 2017 in NYC history was to be shown the door.”

In a short interview with the NY Post, NYPD Chief Jaffe said she was called into a meeting and told she was out.

“They memorized three sentences: ‘There’s no easy way to do this. It’s a new year. We want to go in a new direction, with new leadership,’ ” Jaffe recalled. “I said, ‘OK’ and walked out.”

“One only wonders what kind of riots the city would have seen if Jaffe was an African American”, another source bemoaned.

“MccRay would have been out there with Sharpton and the rest of her friends screaming ‘no justice no peace!'”.

Multiple African American, Jewish, and Hispanic community activists tell us that they are outraged about the way things were just done.

Another Executive Officer who recently retired said “I’m glad I got out before this mess. Clearly, the NYPD is not a place for white men any longer. There is a clear and open bias towards white members of the Department, and everyone is scared to say anything about it – including the media. I suggest the reporters start digging around and see for themselves that the NYPD promotes incompetent minorities over incredibly talented white men and women”.