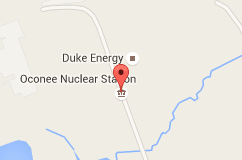 OCONEE COUNTY, SOUTH CAROLINA — (Scroll down for video) — Fires and explosions were reported at the Oconee Nuclear Station on Sunday. The blaze is now under control.

According to WYFF, the facility has declared an “unusual event.” Emergency crews were responding. The fire chief tells local media a transformer caught fire.

Officials also said there is no public threat due to this incident. Officials say the fire broke out due to an equipment issue. They also found a down power line.

MORE: The Oconee Nuclear Station is a nuclear power plant located on Lake Keowee near Seneca, South Carolina, and has an energy output capacity of over 2,500 megawatts. It is the second nuclear power plant in the United States to have its operating license extended for an additional twenty years by the U.S. Nuclear Regulatory Commission (NRC) (the application for the Calvert Cliffs plant in Maryland preceded it).

This plant has three Babcock & Wilcox pressurized water reactors, and is operated by Duke Energy.