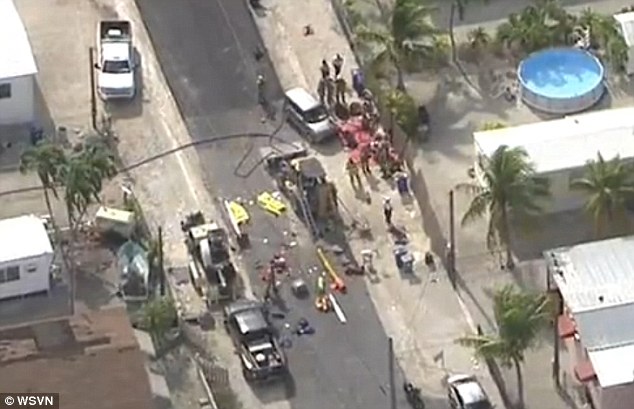 When a utility worker in Key Largo, Florida, noticed that a section of a paved street was not settling properly, he decided to remove a manhole cover and descend into the earth.

Moments later on Monday morning, the 15-foot-deep hole went silent. Sensing the man was trapped, a fellow utility worker climbed into the drainage hole to rescue him. When he, too, stopped responding, a third worker entered the same hole.

All three men died, overcome by poisonous fumes underground, the Monroe County Sheriff’s Office said in a statement. A Key Largo firefighter who made a desperate attempt to save the men also became unconscious within seconds. The firefighter, Leonardo Moreno, an eight-year veteran of the department, was flown to a hospital and was in critical condition Tuesday.

The hole, just wide enough to fit a body, was filled with hydrogen sulfide and methane gas created from years of rotted vegetation, the Miami Herald reported. None of the four men wore masks or carried the air packs that could have likely saved their lives. Moreno descended into the hole without his air tank because he could not fit through the hole with it, according to Monroe County Sheriff Rick Ramsay.

A colleague was able to wear his gear and pull Moreno out. Firefighters also retrieved two of the workers, who were confirmed dead at the scene, and treated a fourth utility worker at the scene. The third deceased worker’s body was recovered from the hole Monday afternoon.

The men worked for private construction contractor Douglas N. Higgins and were responding to neighbor complaints of sewage backup in the area, Ramsay said. They were identified as 34-year-old Elway Gray of Fort Lauderdale, 49-year-old Louis O’Keefe of Little Torch Key and 24-year-old Robert Wilson of Summerland Key.

One towing company posted a message on Facebook reaching out to the families of the men who were killed.

“While visitors might see Monroe County as a collection of tropical resorts and tourist getaways, to locals, our little island is a small town like any other,” the company wrote. “We all know someone, or the families of someone, who was lost today. To say our hearts break for them is an understatement. Nobody can bring our friends and neighbors back.”

Three white crosses were left at the 106-mile marker on Long Key Road where the deaths occurred.

A woman who lives near the manhole told Local 10 News that the area has smelled of rotten eggs for the past couple of months.

“It smells like rotten eggs,” Barbara Guerra said. “It was out here again this morning and I’m used to it because they’ve been a whole year already.” She said she knew the workers from walking by the area every morning, and would often wave at them and bring them water.

Three sheriff’s deputies who were exposed to fumes were also taken to a hospital for treatment. Five households in the area were evacuated for part of the day Monday, as a Miami-Dade County hazmat team performed tests at the scene. Their tests revealed there was both methane gas and hydrogen sulfide gas coupled with low levels of oxygen in the pipe, the sheriff’s office said in the statement.

The Occupational Safety and Health Administration is responding to the scene as part of its own investigation into the circumstances of the workers’ deaths.