AUSTIN – Freddie Alaniz, 37, a Texas 10 Most Wanted Fugitive, is now in custody after being arrested Feb. 26 in Mexico. Alaniz was wanted for murder and sexual assault of a child, and has been a fugitive since 2006. The arrest was not the result of tip information received through Texas Crime Stoppers, and no reward will be paid.

Working off investigative information, a joint investigation between the U.S. Marshals Service Lone Star Fugitive Task Force and Texas Department of Public Safety (DPS) Special Agents determined that Alaniz had fled to Mexico. Further investigation with Mexican authorities revealed Alaniz was in Cancun, Mexico, where he was taken into custody. On Feb. 27, he was returned to the U.S. Alaniz was transported from a detention facility near Houston to San Antonio today. 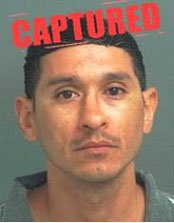 In February 2006, Alaniz was arrested for aggravated assault in San Antonio for allegedly stabbing a man during a fight, but he was able to make bail and subsequently fled. The victim later died as a result of his injuries, and the Bexar County Sheriff’s Office issued an arrest warrant for murder in August 2006. The sexual assault of a child arrest warrant stems from a 2006 incident in Zavala County.