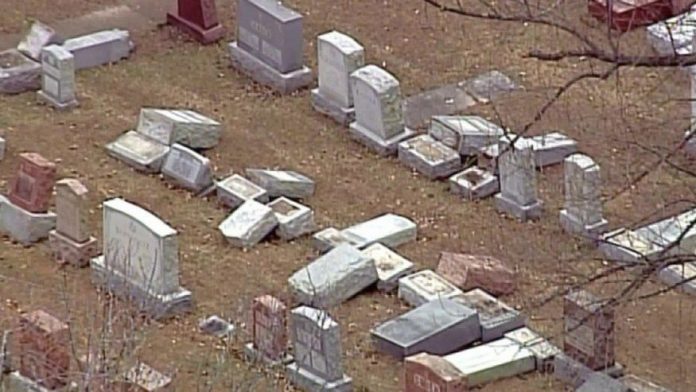 More than 100 headstones in a Jewish cemetery near St Louis were damaged over the weekend.

Detectives with the University City Police Department are working to find out who is responsible for the damage.

The incident happened at the Chesed Shel Emeth Cemetery.

Police have not yet officially called this incident a hate crime, but believe more than one person is responsible.

The incident comes amid a rise in anti-Semitic attacks across the United States. Last month, three people were arrested in connection with the vandalism of the headstone of a Jewish couple buried in the cemetery of a small Indiana town.

Earlier this month, the windows of the Chicago Loop Synagogue were smashed and copies of swastikas were taped to its front doors.

A 31-year-old man was arrested and charged with a hate crime in connection with the vandalism.

The vandalism at the St. Louis cemetery was reported just hours after at least 10 Jewish community centers across the United States were targeted with bomb threats for the fourth time in five weeks.