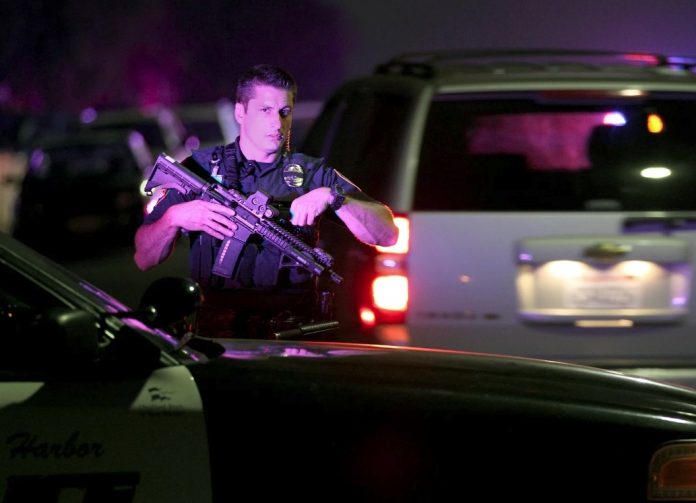 Police in San Diego said one officer was fatally shot and another seriously wounded during a traffic stop late Thursday night near downtown. By Friday morning, the wounded officer had made it through surgery and was expected to survive.

Following the late-night shooting, authorities urged residents to shelter-in-place and launched a manhunt to search for the shooter.

San Diego Police Chief Shelley Zimmerman told reporters at a news conference early Friday that a suspect was found in an open ravine not far from the scene, according to NBC affiliate KNSD. Police said they were still searching for other possible suspects.

Neither the officers who were shot nor the suspect in the shooting have been identified.

Zimmerman said the circumstances surrounding the shooting are still unclear because the case in still under investigation and she would not say whether it was considered an ambush, according to KNSD. But she said the two officers, who were members of the police department’s gang unit, were conducting a traffic stop about 11 p.m. and, almost immediately, called for emergency cover.

When the other law enforcement officers arrived on the scene, she said, they found the two officers suffering from gunshot wounds.

Zimmerman said one of the officers was shot numerous times in the upper torso and was rushed to a nearby hospital in a patrol car.

The other officer was taken into surgery and, hours later, police announced on Twitter that the officer was expected to survive.

Zimmerman said the officer who died is survived by his wife and two children. She said authorities were still notifying his family members.