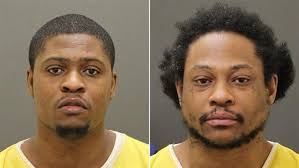 BALTIMORE — Keith Hayes was sentenced to life suspend all but 35 years plus five years supervised probation for Sexual Offense in the First Degree, 35 years for conspiracy to commit sexual offense in the first degree, time served for assault in the second degree, and 5 years for false imprisonment, all to run consecutively to each other for a total sentence of 75 years to run consecutively to his prior conviction of 40 years. In August of this year, Hayes, was convicted of a first-degree sex offense, conspiracy to commit a first-degree sex offense, and false imprisonment for this same incident.

Last week, Travis Burroughs was sentenced to life suspend all but 60 years plus five years of supervised probation for his role in the joint-rape of and false imprisonment of a 24-year-old Baltimore woman in June 2017. Last month, Baltimore city jurors convicted Burroughs of fourth-degree sex offense, sodomy, and false imprisonment. His current sentence must be served consecutively with the pre-existing 80-year sentence he received in August 2018 for sexually assaulting two 14-year-old girls in March of 2017. Both codefendants are previously convicted sex offenders.

On the evening of June 10, 2017, a woman was standing on a bus stop when she was approached by two black males who she later identified as Travis Burroughs and Keith Hayes. After briefly conversing with the men, the woman accepted the men’s proposition to accompany them to “make some money”. They flagged a hack and rode away from the bus stop.

The three arrived at the Park Heights area. They exited the hack and all began walking on the 4800 block of Homer Avenue. Then, one of the men grabbed the woman by her neck, placed a knife to her throat, and both men forced the woman into the basement of an abandoned house located at 4810 Homer Ave. Once in the basement, the woman was stripped of her clothing and sexually assaulted by both men. The defendants stole the victim’s purse, ID, Social Security Card, and $120.00 of her money. Afterwards, one of the men left and the remaining man continued to sexually assault the woman. Sometime thereafter, that man heard a passing car and went upstairs to investigate. The woman took this opportunity to flee the basement and run away from the abandoned house. She found a woman at a nearby bus stop and asked to use her phone to call 911. Baltimore Police Department (BPD) officers responded to the woman’s location, investigated the scene found, recovered a knife and took DNA swabs from the knife, and then transported her to Mercy Hospital where a SAFE exam was conducted and DNA evidence was collected. During the SAFE exam, the woman told the SAFE nurse that two men had sexually assaulted her, that one had used a knife, and one had spit in her face.

Seven months following the sexual assaults, BPD received a notification from the Combined DNA Index System (CODIS), that a routine search of the criminal justice DNA databases produced DNA matches for Keith Hayes and Travis Burroughs from the DNA samples collected and analyzed from the SAFE Exam stemming from the June 10th assault. The case was then assigned to BPD detectives for further investigation.

“I am happy that my Special Victims Unit prosecutors — who do a phenomenal job delivering justice to the survivors of sexual assault—were able to secure this conviction and these defendants will pay dearly for their depraved attacks on this young women,” said State’s Attorney Marilyn Mosby.

“I WANT TO BEHEAD.” NYC Man Admits To Attempting To Join...

Miami Police Captain Who Claimed He Was Black Suspended