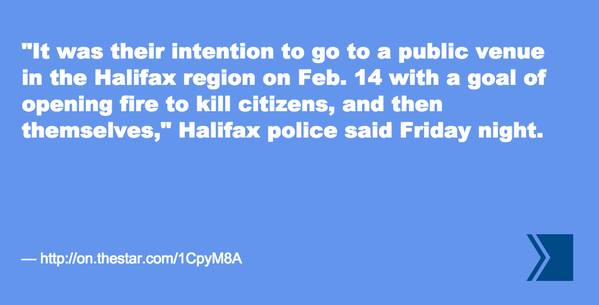 STATEMENT FROM THE ROYAL CANADIAN MOUNTED POLICE OF NOVA SCOTIA:

We’ve invited you here to provide an update on an ongoing investigation involving the sudden death of a 19-year-old Timberlea male and the arrest of three individuals.

On Thursday morning, information came forward to police regarding a potential significant weapons-related threat. RCMP and Halifax Regional Police officers from the Criminal Investigations Division began an investigation. We want people to know we became aware, we acted quickly and intercepted a threat.

Information suggested that a 19-year-old Timberlea male and a 23-year old Geneva, Illinois female had access to firearms and it was their intention to go to a public venue in the Halifax region on February 14th with a goal of opening fire to kill citizens, and then themselves. Evidence also suggested that two other males, ages 20 and 17, of Halifax and Cole Harbour respectively, were involved. Their role is still to be determined as part of the investigation.

Last evening, investigators located the 19-year-old male suspect at a Tiger Maple Avenue residence and at approximately 1:20 a.m., the Emergency Response Team entered his residence and found him deceased. As we previously issued in media release this matter has been referred to the Nova Scotia Serious Incident Response Team for investigation.

At approximately 2 a.m. this morning, police arrested the 20 year-old male and 23 year-old female suspects without incident at the Halifax Stanfield International Airport. Shortly after 11 a.m., police went on to arrest the 17-year-old male suspect without incident at a Cole Harbour residence. All three suspects remain in police custody at this time and the Integrated Criminal Investigations Division continues to investigate.

We believe we have apprehended all known individuals in this matter and eliminated the threat. We are not seeking any further suspects at this time in relation to this investigation. As always we are asking the public to remain vigilant about anything suspicious they may see or hear in their physical or online communities and to not hesitate to report anything to police. Citizens can also report tips anonymously through Crime Stoppers.

I also want to take this opportunity to recognize the tireless efforts of all those involved from the RCMP, Halifax Regional Police, Geneva Police Department in Illinois and other policing partners, who over the past 36 hours have been able to divert what had the potential to be an extremely tragic incident. As police, our priority is public and officer safety. As the Commanding Officer for the RCMP in Nova Scotia, I am extremely pleased to report that this threat was averted.

Chief Blais and I will now take a few questions. Please note that any questions in regard to the investigation into the death of the male should be directed to the Nova Scotia Serious Incident Response Team. As well, I want everyone to understand that this matter is ongoing so we will not be answering any questions specific to the continuing investigation.