Several overnight shootings in Philadelphia, Tennessee, Arizona, and South Carolina left 10 people dead and at least 42 more wounded — adding to the long list of mass shootings in the U.S. this year.

In Philadelphia, the gunfire rang out a half-hour before midnight in the 400 block of South Street — in the city’s Queen Village neighborhood. Hundreds of people were gathered in the streets to enjoy the nightlife when the shooting began.

Another video posted on social media showed a scuffle between three men before the gunfire begins.

#Philadelphia
JUST IN:
Video alleging to show the conflict which erupted into shooting on South Street last night. pic.twitter.com/qwfXhbVY6y

Three people were pronounced dead and 11 more were reported wounded. Police said in a news conference that multiple handguns were recovered but no arrests have been made.

A motive for the shooting remains under investigation, police said.

Our statement on last night's mass shooting in Philadelphia: pic.twitter.com/v5gAR5S83z

“Once again, we see lives lost and people injured in yet another horrendous, brazen and despicable act of gun violence,” Philadelphia Mayor Jim Kenney said in a statement.

In the city of Chattanooga, Tennessee, three people were killed and at least 14 others were injured outside of a nightclub around 2:45 a.m. One of the deceased victims was not struck by gunfire but was run over by a vehicle attempting to flee the chaos, said Chattanooga Police Chief Celeste Murphy.

Murphy said the shooting was an “isolated incident” and there were likely “multiple shooters.” No arrests have been made.

“There’s a lot we don’t know about what happened this morning, but what we do know is that there are families whose lives have been shattered because once again, we had people deciding to resolve their issues with firearms.

Ginny and I are grieving and praying for the families of those who lost their lives and for those who were injured as a result of this act of violence.

And while we are still gathering the facts, in this case, we know that many of the recent acts of violence in our community have revolved around a very small group of people – often the same people, over and over again.

Here is my message to those individuals: We will relentlessly pursue you with all of the resources we have at our disposal. From forensics to federal support, we won’t stop until you’re in police custody. To anyone thinking about turning to violence, don’t—there will be tremendous consequences for you. I should also note that my administration is fully committed to getting the Chattanooga Police Department all the resources they need to stop this cycle of violence.

Our city will not tolerate people who feel they are beyond the law. And while my administration is working hard to address the economic and social factors that often drive people to turn to violence in the first place, we are also committed to ensuring that those who commit acts of violence will be held accountable.

I’m grateful for the Chattanooga Police Department and for all of the first responders across multiple agencies who acted quickly and courageously to contain the situation.

I am also grateful to members of our City Council for being here today. We are all aligned, and we WILL act, together. Our city will treat this like the crisis it is. Over the next few weeks, my administration will be releasing even more ways our community will address gun violence.

And finally, I am a gun owner. I’ve been an avid hunter and marksman all my life—and so I want to say this clearly, I fully support responsible gun ownership, but Congress needs to do their jobs and pass common sense regulations that will help stop this nonsense. That doesn’t mean taking guns away from responsible gun owners, but it does mean mandatory background checks and prohibiting high-capacity magazines that allow shooters to hurt dozens of people without having to so much as reload. In mass shootings between 2009 and 2020, high-capacity magazines led to 5x as many people shot per mass shooting. This stuff is just common sense. And it’s a simple way we can keep people safe.

I’m tired of standing in front of you talking about guns and bodies. Chattanooga will not tolerate this in our community. Our city can put a stop to it, but each of us has to make the choice to do something. If you know anything, no matter how small or insignificant it might seem, call 423-643-5100—you can remain anonymous, we just want the information.

Stop the shooting, stop the violence. This city and our communities are better than this, and we demand it.”

Meanwhile in South Carolina, 8 people were shot and one person was killed after a shooting at a graduation party in Clarendon County. 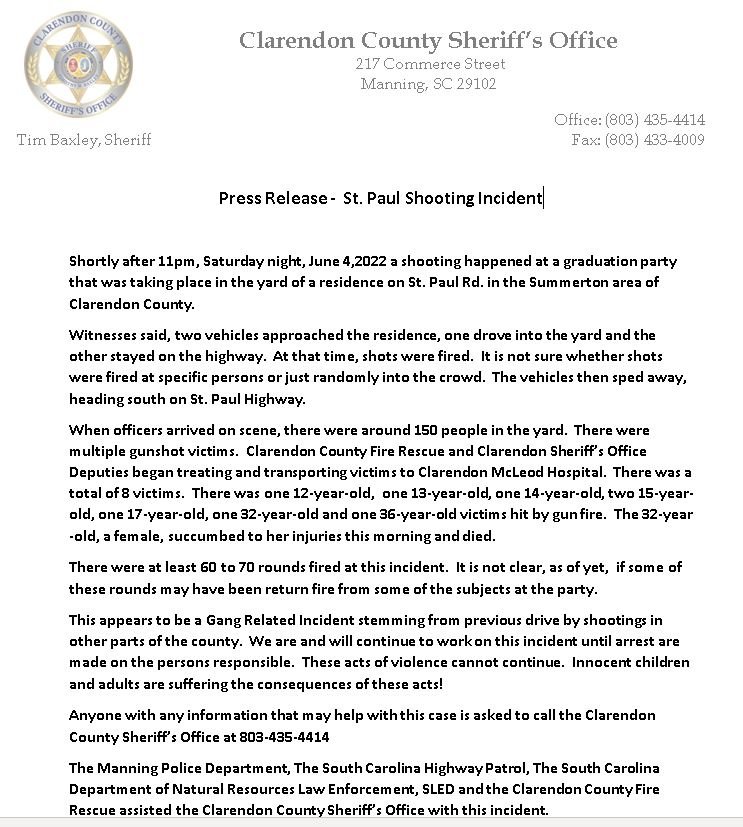 In Phoenix, another shooting at a strip mall left 1 person dead and at least 8 others injured, the AP reported.

In Mesa, Arizona early Sunday 2 people were killed and 2 others were injured outside of a bar, the local ABC affiliate reported.

In Chicago this weekend, at least 17 people were victims of gunfire.

There have been at least 239 mass shootings so far this year, per the Gun Violence Archive.