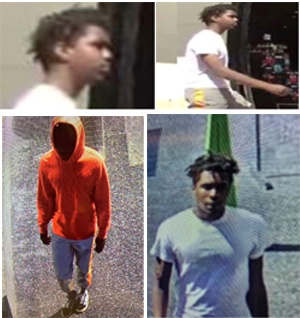 The Los Angeles Police Department’s West Bureau Homicide is asking for the public’s help in providing any information that would lead to the identification and arrest of the suspect responsible for killing 31 year-old Jarick Wayne Henderson of Los Angeles.

On March 16, 2019, at 12:02 p.m., the victim was at a taco truck in the 1500 block of North La Brea Avenue. Investigators believe the suspect took the victims property from a nearby table and attempted to flee. The victim chased the suspect and began to fight with the suspect. The suspect violently assaulted the victim causing his death. The suspect removed his red or orange hooded sweatshirt and was last seen wearing a white T-shirt and exiting the MTA Red Line at the Civic Center on 1st street and Hill in downtown Los Angeles.

The suspect is described as a male Black, 25-30 years of age, 6 feet tall, wearing a red or orange hoodie at the time of the incident. The suspect had short bushy dreads and gray pants with red letters or a stripe on his pants, with black and white checkered “Van’s Style Shoes”. The below picture depicts the suspect after he discarded the hoodie.