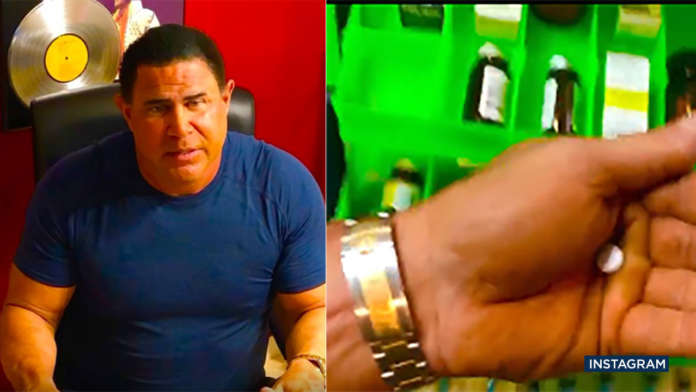 LOS ANGELES – Special agents with the FBI this evening arrested a Southern California man on a federal fraud charge alleging he solicited investments in a company he claimed would be used to market pills that would prevent coronavirus infections and an injectable cure for those already suffering from COVID-19.

Keith Lawrence Middlebrook, 53 – who is associated with several addresses, including residences in Westwood, Newport Beach and Murrieta – was arrested pursuant to a criminal complaint filed late this afternoon in United States District Court in Los Angeles. The complaint charges Middlebrook with one count of attempted wire fraud, a felony offense that carries a statutory maximum penalty of 20 years in federal prison.

The complaint alleges that Middlebrook claimed to have personally developed a “patent-pending cure” and a treatment that prevents coronavirus infection, even though every major health authority has warned that there is no specific antiviral treatment for COVID-19 and no vaccine to prevent coronavirus infection.

Middlebrook was arrested during a meeting in which he delivered pills – purportedly the treatment that prevents coronavirus infection – to an undercover agent who was posing as an investor.

Middlebrook fraudulently solicited funds with promises of massive profits for a company he called Quantum Prevention CV Inc. (QP20), and he falsely claimed to at least one potential investor that Earvin “Magic” Johnson was a member of the board of directors, according to the affidavit in support of the complaint. Mr. Johnson confirmed to investigators that he knew nothing about Middlebrook’s company.

QP20, according to Middlebrook, would mass produce the pills he claimed would prevent COVID-19. Upon receipt of investor funds, Middlebrook would issue shares in both QP20 and Quantum Cure CV 2020 (QC20), another alleged corporation Middlebrook claimed would market the serum that could cure COVID-19 patients within two to three days, the complaint alleges.

In communications with a cooperating witness, Middlebrook said, “I have Developed the Cure for the CoronaVirus COVID-19…*LA Patient tested Positive for CoronaVirus got up and walked out 51 hours after my Injection,” according to the affidavit. In the same text message, Middlebrook also wrote, “Investors who come in at ground level say $1M will parachute with $200M – $300M…Conservative Minimum.”

“During these difficult days, scams like this are using blatant lies to prey upon our fears and weaknesses,” said United States Attorney Nick Hanna. “While this may be the first federal criminal case in the nation stemming from the pandemic, it certainly will not be the last. I again am urging everyone to be extremely wary of outlandish medical claims and false promises of immense profits. And to those who perpetrate these schemes, know that federal authorities are out in force to protect all Americans, and we will move aggressively against anyone seeking to cheat the public during this critical time.”

“There’s a particular opportunistic cruelty in seeking to profit based on the fear and helplessness of others,” said Paul Delacourt, the Assistant Director in Charge of the FBI’s Los Angeles Field Office. “As the country reacts to the current crisis, and while many suffer from losing a loved one or losing their livelihood, the last thing Americans need are con-artists who hawk miracle cures they know are not tested, guaranteed, nor approved. The FBI is using a variety of tools to identify anyone who exploits the current crisis through investment frauds or a variety of cyber schemes – and is proactively warning investors to thoroughly research any salesperson or any product claiming to save lives, before losing their money, or creating false hope.”

Middlebrook will be held in federal custody until his initial court appearance, which is expected to be Thursday afternoon in United States District Court in downtown Los Angeles.

In a video posted eight days ago to his Instagram account, Middlebrook stated that he had created the cure for COVID-19, and he showed viewers a syringe with a clear liquid and described how his cure worked, according to the affidavit. Accompanying the video is text that reads, in part:

Yes I have Developed the Cure for the CoronaVirus COVID-19. After 6 Weeks of Intense Focus and Development (and very little sleep). I am currently going into Mass Production. … The CDC, WHO and Mainstream Media have created a Pandemonium environment. To answer this (just because it’s what I do) I have created a CoronaVirus Prevention Pill” (After 3 Days of taking it the person is Immune to the Virus and STAYS immune as long as they continue taking it once a day it the morning) and also the COVID-19 Formula Vaccine Cure to Satisfy the Physiological and Phycological Need at large.

The affidavit states that as of March 24 the video had been viewed more than 633,000 times.

In another Instagram video that was viewed more than 1 million times over approximately three days, Middlebrook shows a pill he says prevents him from contracting COVID-19 and “states that if he took the pill and walked into the Staples Center filled with COVID-19 positive individuals, he could not contract the virus,” according to the criminal complaint.

The affidavit focuses on communications – both written and over the phone – between Middlebrook and two people he thought were potential investors, the cooperating witness and an undercover FBI agent. Middlebrook made a series of claims and promises to the undercover agent, including guaranteeing that a $300,000 investment would yield $30 million, a promise that was secured “by a current $10 billion offer from an unnamed buyer in Dubai,” according to the affidavit.