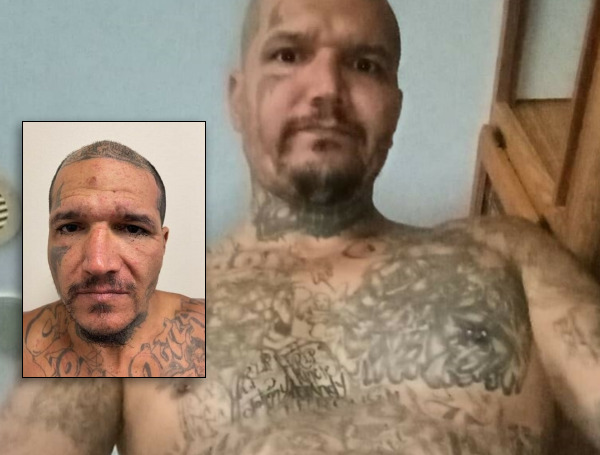 Simmons, 42, has an extensive arrest, conviction, and prison incarceration history—and he was wanted for the murder of a homeless man whose body was recovered Tuesday afternoon (May 3rd) in a shallow grave at a homeless camp just northwest of the intersection of US 17 and Snively Avenue.

“Our suspect is no stranger to trouble, and is a dangerous person. Our search for him was hindered by some bad weather Tuesday, but deputies held a tight perimeter around where he was last seen, and contained him there overnight. After sunrise, we were able to methodically close in on him and capture him. Our deputies did a fantastic job, and I’d like to also thank K-9 units from the Winter Haven and Auburndale police departments who assisted.” – Grady Judd, Sheriff

The investigation began Tuesday (May 3rd) at around 2:20 p.m. when three people from the homeless camp came forward with information about a possible murder in the camp over the past weekend.

The witnesses only knew the victim as an Hispanic male who was believed to be between 30-40 years old. Detectives have positively identified him as a 39-year-old white male and are working on locating and notifying his next of kin.

Statements from the witnesses revealed key moments leading up to the victim’s death, which were not previously reported to law enforcement:

·        During the weekend of April 30-May 1st – an altercation had occurred between Simmons and the victim which resulted in the victim receiving a laceration on his back, but he refused to seek medical treatment.

·         The victim was seen bleeding on his left arm during a fist fight with Simmons.

·         Simmons returned to the camp and was asked about the victim’s whereabouts. Simmons told the witness that the victim left for Avon Park. Simmons then left the camp again at around 9:00 a.m. and was not seen again until after sunset on Sunday, May 1st.

·        Monday, May 2nd – A witness found the victim’s blanket and went to pick it up. Upon grabbing the blanket, a foot was felt within it, and the witness immediately left, thinking it was the victim’s foot, and that he was possibly deceased.

At about 5:35 p.m. Tuesday, Homicide Unit detectives located a shallow grave near the homeless camp. A short time later, Simmons, who was walking near the camp, saw deputies and fled, but deputies were able to keep him confined to a small area.

At 9:32 a.m. Wednesday morning (May 4th), deputies captured Simmons on business property which is adjacent to the heavily wooded area containing the homeless camp.

Simmons’ prior criminal history includes 16 felonies and 12 misdemeanors and he has been in prison four times, with his most recent release coming in October of 2021. His list of previous charges consists of: Aggravated Battery, Burglaries, Grand Thefts, Motor Vehicle Theft, Escape, Carrying Concealed Weapon, Contributing to the Delinquency of a Minor, Drug Possessions, Retail Theft, and Probation Violation.