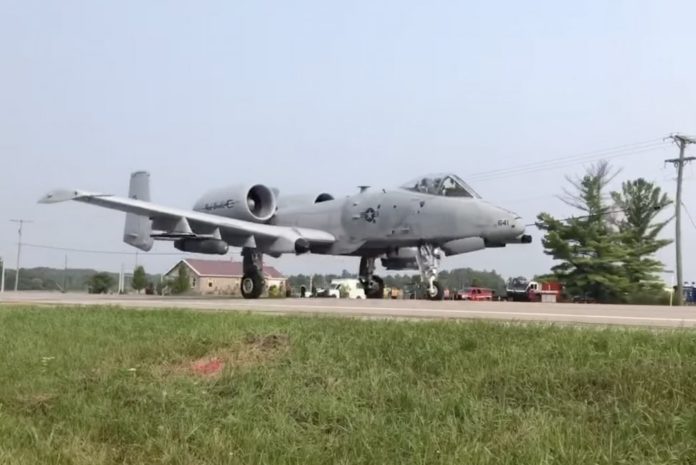 The Michigan National Guard, in coordination with the Michigan Department of Transportation (MDOT) and local partners, closed a portion of Michigan State Highway M-32 for hours on Thursday to “test its ability to land aircraft on roadways designed for cars and trucks.”

No speeding citations were issued during the exercise. pic.twitter.com/isAoy05FoV

“This is believed to be the first time in history that modern Air Force aircraft have intentionally landed on a civilian roadway on U.S. soil,” said U.S. Air Force Col. James Rossi, Alpena Combat Readiness Training Center commander. “Our efforts are focused on our ability to train the warfighter in any environment across the continuum so our nation can compete, deter, and win today and tomorrow.”

A-10 Thunderbolt II aircraft were specifically designed to be able to operate from an austere location and have exercised the ability to do so in the past in conjunction with NATO partners. In June 2018, A-10s from the Michigan Air National Guard conducted highway landings in Estonia as part of the multinational exercise Saber Strike.

The Air Force is shifting its operations concepts to project power through Agile Combat Employment (ACE) and has been applying ACE tactics to train and sustain its agility. Dynamic exercises like the highway landing during Northern Strike demonstrates the Air Force’s ability to deploy rapidly from anywhere, at any time, which is a critical edge the Air Force maintains over its adversaries.

“This year’s Northern Strike exercise includes testing the rapid insertion of an Air Expeditionary Wing (AEW) into a bare-base environment when the 127th Wing from Selfridge (ANBG) deploys up to the Alpena CRTC,” said U.S. Air Force Brig. Gen. Bryan Teff, Michigan Air National Guard adjutant general for air. “They will establish logistics and communications in order to receive follow-on forces, generate mission employment including the austere landing on M-32, and project combat power across all domains.”

“Michigan’s NADWC is uniquely postured to provide ample training airspace and facilities to accommodate training for the future high-end fight,” said Teff. “Michigan is integral to the joint fight and future warfighter. The joint force cannot execute without training as we fight.”