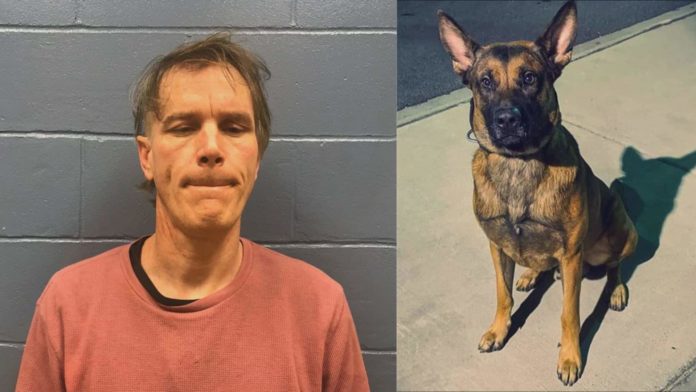 Gulfport, Miss. – A Mobile, Alabama man pled guilty to one count of being a felon in possession of a firearm and one count of animal crushing, announced U.S. Attorney Darren J. LaMarca and Special Agent in Charge Kurt Thielhorn of the Bureau of Alcohol, Tobacco, Firearms and Explosives.

According to court records, on March 29, 2022, Moss Point Police officers responded to an alarm call at Tay’s BBQ/Shell Station located on Highway 63 in Moss Point. They began searching the area and located McGuire behind another business. McGuire fled when officers approached him.

Moss Point Police K9 “Buddy” was released to track McGuire. Buddy pursued McGuire into a wooded area when officers heard two gunshots. Buddy returned having been shot in the chest. Officers later apprehended McGuire who possessed a sawed-off shotgun and body armor, which he is prohibited from possessing as a previously convicted felon. Buddy survived and will return to work soon.

McGuire will be sentenced on November 15, 2022. He faces a maximum penalty of 10 years in prison for possession of a firearm and 7 years for animal crushing. A federal district judge will determine the sentence after considering the U.S. Sentencing Guidelines and other statutory factors.

The case was investigated by the Bureau of Alcohol, Tobacco, Firearms and Explosives and prosecuted by Assistant U.S. Attorney Erica Rose.