WASHINGTON – Questions have been raised about exactly where Rep. Alexandria Ocasio-Cortez (D-NY) was located when the U.S. Capitol building was stormed by rioters on January 6.

According to an Instagram video posted by Ocasio-Cortez just days after the siege, she stated that she was in her office when the U.S. Capitol building was stormed. She also claimed that rioters had entered her office, according to Newsweek.

“I had a very close encounter, where I thought I was going to die.”

“And so I run back into my office,” she said during the video. “I slam my door. There’s another kind of like back area to my office, and I open it, and there’s a closet and a bathroom. And I jump into my bathroom.”

She also said that as she was hiding in her bathroom “and then I just start to hear these yells of, ‘Where is she?!’ Where is she?!’”

The yell apparently turned out to be from a Capitol Police Officer who was attempting to evacuate people from the building.

.@AOC describes a Capitol Police officer bursting into her office, says his presence “didn’t feel right” and that he was looking at her “in all of this anger and hostility.” Her staffer reportedly wondered if he would have to fight the officer. pic.twitter.com/LCj2JmmFP6

Ocasio-Cortez went on to say she did not feel safe in a secure room or ‘extraction point’ with Republican members of Congress.

She explained “because there were QAnon and white-supremacist sympathizers and, frankly, white-supremacist members of Congress in that extraction point who I know and who I have felt would disclose my location and would create opportunities to allow me to be hurt, kidnapped, et cetera.”

“So I didn’t even feel safe around other members of Congress,” she added.

“It is not an exaggeration to say that many, many members of the House were nearly assassinated,” Ocasio-Cortez said.

“It’s just not an exaggeration to say that at all. We were very lucky that things happened within certain minutes. That allowed members to escape the gap, the House floor unharmed.”

A few important facts were left out of her story.

READ NEXT: GOP Rep. Demands AOC Apologize To Ted Cruz, Or Else! 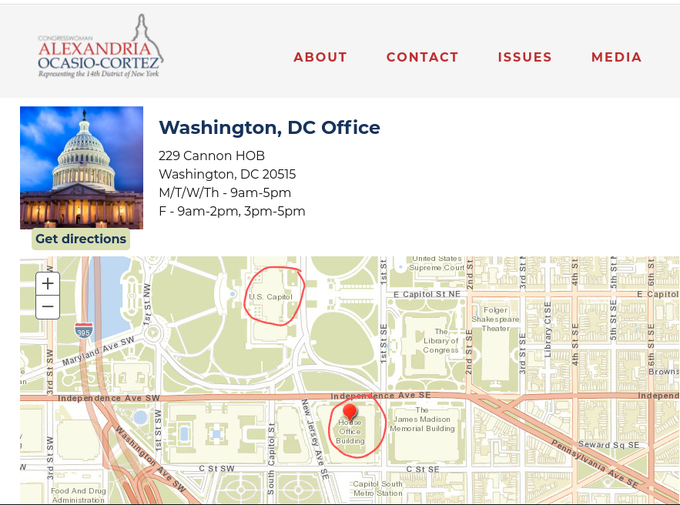 .@AOC made clear she didn’t know who was at her door. Breathless attempts by media to fan fictitious news flames are dangerous.

My office is 2 doors down. Insurrectionists never stormed our hallway. Egregious doesn’t even begin to cover it. Is there nothing MSM won’t politicize? pic.twitter.com/Tl1GiPSOft

Ocasio-Cortez tweeted a thread Wednesday firing back at conservatives who called her out:

This is the latest manipulative take on the right.

They are manipulating the fact that most people don’t know the layout the Capitol complex.

We were all on the Capitol complex – the attack wasn’t just on the dome.

The bombs Trump supporters planted surrounded our offices too. pic.twitter.com/jI18e0XRrd

“The bombs Trump supporters planted surrounded our offices too.”

On January 6, there were reports of bombs that were placed at both the DNC and RNC headquarters in DC. However, there have been no confirmed reports of bombs being placed outside of the Congressional offices — only reports of a suspicious package that was later cleared.

The Congresswoman added, “People were trying to rush and infiltrate our office buildings – that’s why we had to get evacuated in the first place.”

“It is also very damning and revealing that the GOP is now digging both heels in a discrediting campaign.”

“It’s because they know they are implicated, so they’re pivoting to (again) the classic abuse playbook of “it’s not as bad as they say. It was that bad. It’s actually worse.”

JUST IN: AOC was not in the U.S. Capitol building during her "near death" experience. She claims to have been in her office, which is located in the Cannon Building.

Rioters did not breach the Cannon Building.

Breaking911 reached out to AOC’s office for a comment on this story. We have yet to receive a response.