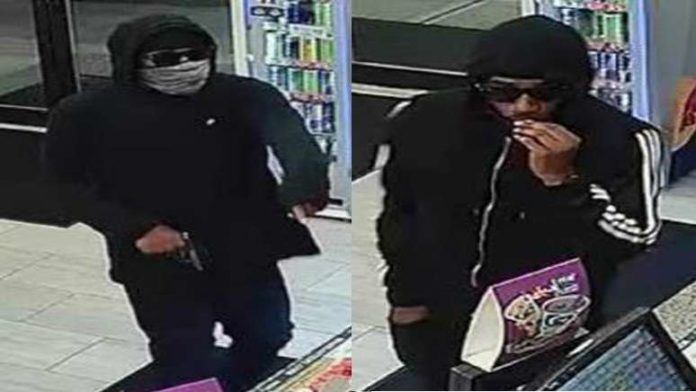 The Federal Bureau of Investigation Violent Crimes Task Force is seeking the public’s assistance in identifying the individual allegedly responsible for at least seven commercial robberies and two attempted commercial robberies at gas stations and convenience stores around the greater Boston area from August 2018 through March 2019.

The male suspect, who is considered armed and dangerous, is likely in his 20s to 30s. In each robbery, he wore dark colored clothing and a face covering. The suspect was armed and, in some of the robberies, walked with a distinctive limp.

During each of the robberies, he approached the cashiers and demanded money. On seven occasions, he brandished a firearm, and on two occasions, he threatened to shoot the cashiers. While demanding money at one of the stores, he claimed he had “child support to pay,” and at another, he allegedly told the cashier he needed diapers.

The public is being asked to review photos and video of the suspect here.

“We need to put a stop to this man’s crime spree before someone gets hurt. He’s armed, he’s dangerous, and his actions in each of the robberies were brazen. We’re asking the public to take a close look at these photos and video and to contact us if you know who he is,’ said Joseph R. Bonavolonta, special agent in charge of the FBI Boston Division.

This individual is allegedly responsible for the following robberies:

The FBI is offering a monetary reward of up to $10,000 for information leading to the identification, arrest, and prosecution of this individual. Anyone with information regarding his whereabouts should call the FBI Boston Division’s Violent Crimes Task Force at 1-857-386-2000. Tips can also be electronically submitted at tips.fbi.gov.