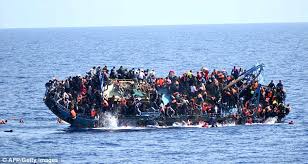 Before it sank, the fishing boat was crammed with more than 700 migrants, who had fled conflict and poverty in sub-Saharan Africa in the hopes of reaching Europe. Firefighters who later recovered the bodies from the decaying ship said they had been “packed in like on the trains for Auschwitz.” Only 28 passengers were rescued from the inky waters on that night, which became the single deadliest shipwreck involving migrants crossing the Mediterranean and galvanized calls for Europe to harness the refugee crisis.

On Tuesday, the Tunisian captain of the boat that sank in April 2015 off the coast of Libya was sentenced to 18 years in jail. An Italian court convicted Mohammed Ali Malek, 28, of multiple counts of manslaughter, smuggling illegal immigrants and causing the shipwreck, according to court documents. The captain’s crew member, a Syrian named Mahmud Bikhit, 25, was sentenced to 5 years in prison on smuggling charges. Each of the men were ordered to pay a fine of nine million euros ($9.5 million).

A prosecutor in the case in Catania, Sicily told The Washington Post that Malek behaved with “enormous negligence,” as he maneuvered the boat that night.

“He was driving a 65-foot boat with 700 people on board, without life jackets, in the night, without lights,” Andrea Bonomo said in a phone interview. “His grave conduct left 700 people dead.”

A Portuguese vessel, the King Jacob, had been approaching the fishing boat that night in pitch darkness, racing to to rescue those aboard, when the boat’s captain tried to steer toward it. A faulty maneuver by the captain caused the boat to collide with the King Jacob, and as the migrants moved to one side of the cramped boat, it capsized.

In court Tuesday, Malek insisted that he was not the captain of the boat, despite the fact that every surviving passenger – including the crew member – told investigators he was, Bonomo said.

In addition to bringing an aspect of closure to the tragedy, the verdict was significant for two reasons. First, it reaffirmed Italy’s right to take on illegal immigration cases occurring in international waters, Bonomo said. The court also made the notable move to consider the surviving migrants victims, instead of suspects, of illegal immigration. This rationale was that the migrants never reached Italy’s coast on their own, but rather, were transported by rescuers to the country after the sinking of the boat, Bonomo said.

“This was one of the first times they have been considered victims and witnesses, and were not penalized,” Bonomo said.

The shipwreck marked what was then the deadliest month yet in an surge in refugees making the dangerous journey to Europe to escape war, persecution and poverty in West Africa, the Middle East and beyond. Both the number of migrants making the journey to Italy – and the number who died in the process – grew in the year that followed: In 2016, 176,678 people arrived by sea in Italy, more than in either 2014 or 2015, according to the International Organization of Migration. The number of known deaths in 2016 resulting from smuggling between Libya and Italy totaled 4,244, compared to 2,868 last year.

Through an exchange of letters with BBC News earlier this year, Malek reiterated his innocence, saying he paid the equivalent of $1,600 to take the boat to Italy. He drew the BBC a diagram of the shipwreck, claiming the boat had lost balance because of waves created by the King Jacob’s propeller.

Malek affirmed that he was simply a migrant passenger on the boat and was scapegoated by the other survivors because he is Tunisian, AFP reported.

“It’s the truth. I’ve always told the truth,” Malek said in court before the verdict Tuesday. Malek, who said he lived in Italy for two and a half years, told the court that as soon as he told police his name, he said he was a passenger. He plans to appeal the verdict, according to Italian news service ANSA.

“I have a young son with an Italian woman,” he said. “I want to marry her and recognize the baby.”

The King Jacob’s captain, Abdullah Ambrousi, said when he saw the fishing boat sail erratically toward him, he cut the engines to avoid a crash. But the boat full of migrants increased its speed, slamming into the vessel.

In their witness accounts, surviving passengers told authorities Malek had been organizing the trip with traffickers and smugglers in Libya, Bonomo said. While prosecutors have been able to investigate and identify such organizers in parts of Egypt, they have been unable to investigate further in Libya, due to the political instability there.

Bonomo said the prosecutors were “satisfied” with Tuesday’s conviction, but that the real challenge will be to find and charge the people involved back in Libya.

“Unfortunately without international cooperation,” he said, “we are not able to do that.”

Unlike most criminal trials, not a single family member represented the 700 dead at Tuesday’s court sentencing, as the victims came from poor families in parts of sub-Saharan Africa, making them unable to travel to Europe for the trial, James Reynolds reported for BBC News.

Many of the victims were from Mali, Gambia, Senegal and Ethiopia. Two of the survivors were young Bangladeshis who took part in the case as civil plaintiffs.

The ship’s passengers – who each had to pay between 500 and 1,000 Libyan dinars for the trip – had departed from somewhere near Tripoli on April 16, 2015. For up to 30 days, the migrants had been kept inside a farm near the port and were loaded onto trucks before they embarked, The Post reported. In at least one instance, one of the migrants was hit with a club because he wanted to go to the bathroom and did not ask for permission.

According to interviews with survivors, many were trapped below decks on the three-tiered vessel, leaving them helpless as the boat capsized.

For months, Italian forensic scientists sorted through decomposed body parts to count the victims. The Italian navy raised the rotting ship – packed with corpses – from the seabed earlier this year, at a cost of ten million euros ($10.6 million) AFP reported.

The government had promised to provide victims with decent burials as a symbol of respect for the migrants who have died crossing the Mediterranean. Corpses were found packed five to a square yard, with some even squeezed into the bilges, The Times reported. The Italian court totaled the dead at about 700, but the head pathologist has said the death count could be as high as 900.

Libya has served as a main departure point for migrants, and has been in a state of turmoil since allied military action helped bring down the regime of Moammar Gadhafi in 2011. A joint United Nations report released Tuesday described the abuses faced by migrants detained in Libya, calling the violations a “human rights crisis affecting tens of thousands of people.”

“People smuggled or trafficked into Libya face torture, forced labour and sexual exploitation along the route, and many also while held in arbitrary detention,” said Martin Kobler, the Secretary General’s Special Representative for Libya and Head of the U.N. Support Mission in Libya.

The report was based on information gathered in Libya and from interviews with migrants who had arrived in Italy from Libya. According to interviews, the places of detention are severely overcrowded, with insufficient food and clean water and no access to toilets. Detainees are often forced to defecate and urinate in their cells, and malnutrition and illness are common.

“We are called animals and are treated as animals,” a 16-year-old boy from Eritrea told the U.N. Support Mission in Libya. “They beat us with what falls into their hands . . . it can be a rock, a stick, a brick,” a child migrant interviewed in Italy said.