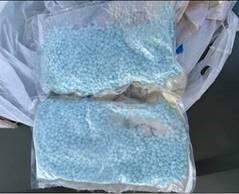 YUMA, Ariz. – Yuma Sector Border Patrol agents assigned to the Wellton Station arrested two U.S. citizens after finding over a pound of fentanyl pills hidden under the passenger seat of the car they were driving through the Interstate 8 immigration checkpoint Thursday morning.

Agents sent a Chevrolet Malibu to the checkpoint’s secondary inspection area at approximately 10 a.m. following a canine alert. While in secondary, a search of the vehicle revealed two plastic bags full of fentanyl pills wrapped in a hospital gown and hidden under the front passenger seat. The fentanyl pills, which weighed 1.276 pounds, were valued at $18,500.

In addition to arresting the two vehicle occupants, agents also seized the narcotics and the vehicle.

Fentanyl is a synthetic opioid that is 50-100 times more potent than heroin, oxycodone and morphine. Just two to three milligrams of fentanyl can kill a person. The amount of fentanyl found in the vehicle is equal to 578,783 milligrams.