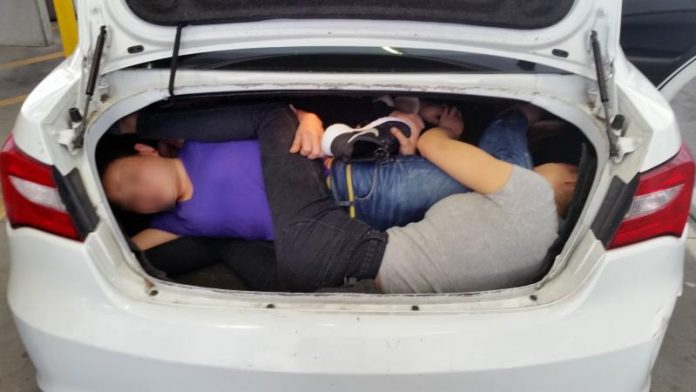 SAN DIEGO – U.S. Customs and Border Protection officers at the San Ysidro port of entry thwarted an alleged human-smuggling attempt Tuesday after discovering four Chinese nationals concealed in the trunk of a vehicle.

“Concealing persons in vehicles is dangerous and could have severe consequences,” said Pete Flores, Director of Field Operations for CBP in San Diego.  “San Ysidro CBP officers stopped a violation of our immigration law and were able to resolve the incident safely.”

The incident occurred at about 5:45 p.m., on Mar. 14, when a 24-year-old male U.S. citizen, entered the San Ysidro border crossing driving a 2014 Chrysler 200.  While the vehicle was at the booth for inspection, a roving CBP Canine team’s Narcotic/Human Detector Dog alerted.  Officers examined the vehicle’s trunk and discovered four individuals crammed inside.

Officers extracted three females and one male, all Chinese nationals, from the trunk and escorted them to a secure location for further processing.  Officers confirmed that the Chinese nationals had no legal ability to enter the United States.

The driver will face federal charges related to the incident. He was later transported to Metropolitan Correctional Center (MCC) to await arraignment.

CBP placed an immigration hold on the Chinese nationals to initiate removal from the United States at the conclusion of the criminal proceedings.