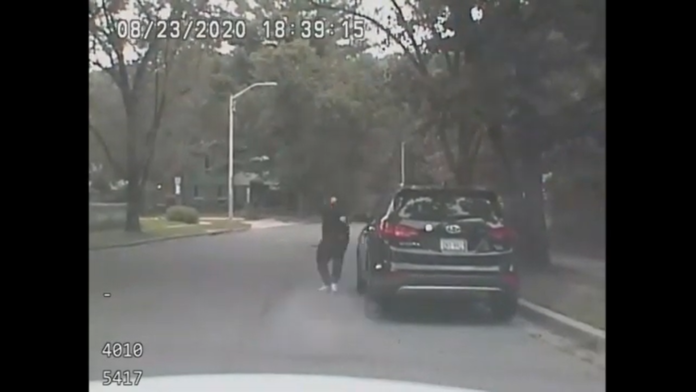 The Prince George’s County Police Department arrested and charged two men for opening fire on patrol officers, shooting three of those officers. The patrol officers were attacked while responding to a call for a residential robbery in progress at a home in the 1300 block of Capital View Terrace in Landover on Sunday at 6:35 pm.

The suspects are 45-year-old Andre Larnell Smith of the 1000 block of Lancaster Boulevard in Mechanicsburg, Pennsylvania, and 27-year-old Steven Maurice Warren of the 2100 block of Martin Luther King Jr. Avenue in Southeast, Washington. Both Smith and Warren face multiple charges to include first and second degree attempted murder, assault and gun charges.

The first arriving officer’s dashcam recorded the start of the unprovoked attack. The suspects opened fire as soon as that first officer stopped his cruiser.

The officer was shot multiple times but was still able to return fire and make an emergency radio dispatch for help. The suspects got into their car and sped down the street before making a U-turn and headed back toward the officers. The suspects continued to fire on the officers while attempting to flee the area but crashed into a tree on Capital View Terrace. Both suspects suffered injuries related to the crash. Neither suspect was shot. They were then taken into custody. One weapon was recovered on the scene. A second was located in the suspects’ car.

Two of the injured officers are now recovering at home and one remains hospitalized. Their injuries are not considered life-threatening. The wounded officers include a 15-year veteran, an officer with five years of service and one who joined the department four years ago.

A total of four officers discharged their duty weapons on the scene. They are now on routine administrative leave pending the outcome of the investigation.