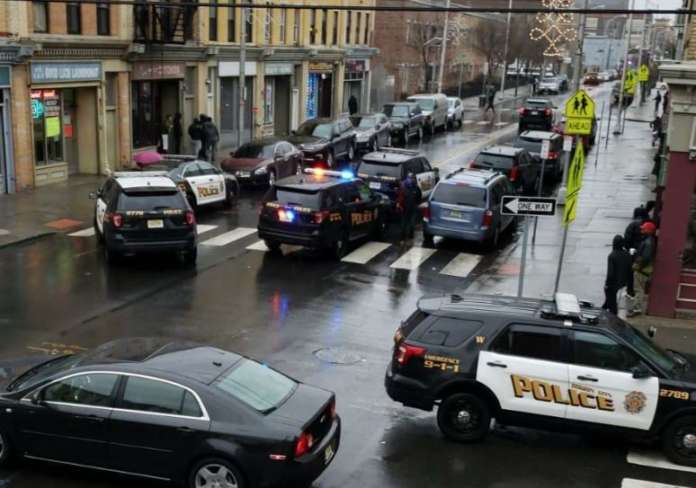 There was an active shooter situation unfolding in Jersey City on Tuesday afternoon in which six people were killed. Three officers were shot, one fatally and the suspects were also killed. A civilian was also struck by gunfire.

Two gunmen were firing at police officers and random people. The gunmen were shooting from inside a bodega located at 223 Martin Luther King Drive near Bidwell Avenue. The gunfight began at a cemetery before the suspects fled into the Jewish-owned business.

Police say the two arrived with a U-Haul van and had long-guns. A SWAT team was responding and police snipers were posted on rooftops.

Two shooters were later reported ‘down.’ Multiple bodies were also reported inside the store.

At least 12 schools in the area were placed on lockdown. The ATF and NYPD also responded to assist. The White House said President Trump was briefed on the situation.

“Our thoughts and prayers are with the men and women of the Jersey City Police Department, especially with the officers shot during this standoff, and with the residents and schoolchildren currently under lockdown,” Democratic Gov. Phil Murphy said. “I have every confidence in our law enforcement professionals to ensure the safety of the community and resolve this situation.”

Jersey City Mayor Steve Fulop later said in a tweet that the Kosher market was targeted, writing, “Based on our initial investigation (which is ongoing) we now believe the active shooters targeted the location they attacked. Due to an excess of caution the community may see additional police resources in the days/weeks ahead.”

A motive for the shooting was unknown.