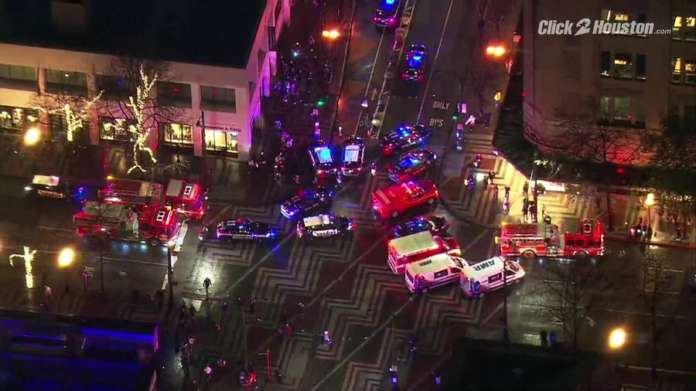 WASHINGTON STATE — At least six people were wounded, 1 fatally, in a shooting in downtown Seattle Wednesday evening. Five others were also reported as critically wounded. A child is reportedly among the victims.

The gunman remains at large.

According to local media, the gunfire broke out around 5 p.m. local time near Third Avenue and Pine Street–next to a Macy’s and McDonald’s. Dozens of police units and ambulances responded to the area.

Homicide and gang investigators were on scene combing through surveillance video in attempts to identify the shooter.

“We’ve locked down the scene,” Seattle Police Chief Carmen Best said. “This is not an active shooting at this point, but we are collecting evidence and information.”

It was unclear what led up to the shooting. A motive for the crime is unknown.

“We heard what sounded like a bunch of automatic weapon fire — just 30-40 shots, just ‘Bam-bam-bam-bam-bam!’ ” a witness told KOMO. “We saw people running up the sidewalk toward the McDonalds and hiding around the corner.”

Officers investigating shooting near 4th and Pine. Multiple victims. The suspect has fled, and police are searching for him. Officers and medics are providing first aid to the injured. Additional information to come.

BREAKING NEWSZ Heard the sound of gunfire during my 5p live shot about a shooting in Belltown— ran down to 3rd and Pine. Multiple victims. @KIRO7Seattle pic.twitter.com/G6Ff5RCRjB

BREAKING NEWS: Can see medics working on 2 people outside McDonald’s, 1 man on the sidewalk with bullet to his leg outside Macy’s, and officers are speaking to another person down on the ground inside Victrola (inside Macy’s building). @KIRO7Seattle pic.twitter.com/ue3T61WuqM

Detectives are investigating after six people were wounded by gunfire, one fatally, at 3rd and Pine. The suspect(s) fled the scene. If you have information about this incident, please call our tip line at (206) 233-5000