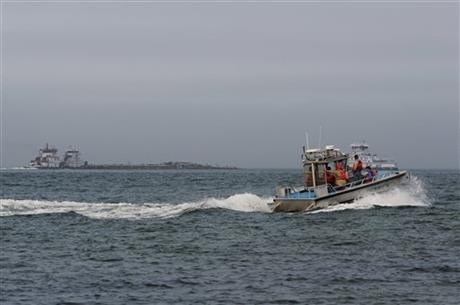 McALLEN, Texas (AP) — A barge carrying nearly a million gallons of especially thick, sticky oil collided with a ship in Galveston Bay on Saturday, spilling an unknown amount of the fuel into the popular bird habitat just as the peak of the migratory shorebird season was approaching.

Booms were brought in to try to contain the spill, which the Coast Guard said was reported at around 12:30 p.m. by the captain of the 585-foot ship, Summer Wind.

The ship collided with a barge carrying 924,000 gallons of fuel oil that was being towed by the vessel Miss Susan, the Coast Guard said. It didn’t give an estimate of how much fuel had spilled into the bay, but there was reportedly a visible sheen of oil at the scene.

The barge was being towed from Texas City to Bolivar at the time. The Coast Guard said that Kirby Inland Marine, which owns the tow vessel and barge, was working with it and the Texas General Land Office at the scene.