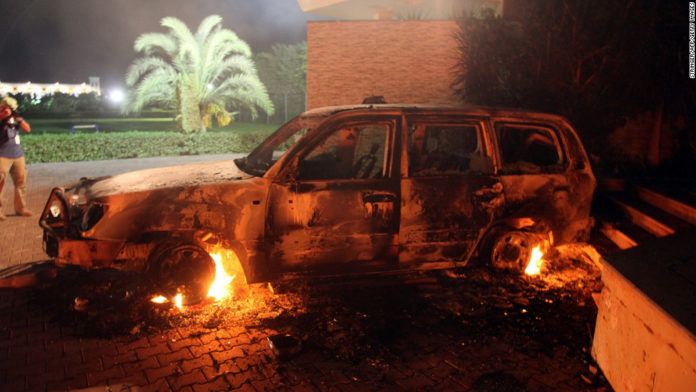 Mustafa al-Imam, a Libyan national approximately 48 years old, was found guilty of terrorism charges for his participation in the Sept. 11, 2012, attack on the U.S. Special Mission and Annex in Benghazi, Libya. Ambassador J. Christopher Stevens and U.S. government personnel Sean Smith, Tyrone Woods and Glen Doherty died in the attack at the Mission and the nearby Annex in Benghazi.

A judge declared a mistrial on 15 other criminal charges against the Benghazi conspirator after the jury did not reach an agreement on al-Imam’s guilt of murder.

“We will never forget those we lost in Benghazi on Sept. 11, 2012 – Tyrone Woods, Sean Smith, Glen Doherty, and Ambassador Christopher Stevens,” said Assistant Attorney General Demers. “And we will not rest in our pursuit of the terrorists who attacked our facilities and killed these four courageous Americans – they must be held accountable for their crimes. I want to thank the agents, analysts, and prosecutors – and all of their partners in the U.S. government – who are responsible for this important investigation.”

“Mustafa al-Imam was found guilty and will be held accountable for his role in the terrorist attack that destroyed the U.S. Mission in Benghazi,” said U.S. Attorney Liu. “Four American heroes lost their lives and others were seriously wounded during that attack. We will continue to work with our law enforcement partners to pursue justice against those who commit terrorist acts against the United States no matter how far we must go or how long it takes.”

“Mustafa Al-Imam has been found guilty for his role in a brutal terrorist attack on U.S. diplomatic facilities in Benghazi that killed four Americans,” said Assistant Director McGarrity. “This case shows the FBI’s commitment to bring to justice those who commit acts of terror against the United States and our citizens — no matter how far away those acts take place or how long an investigation may take.”

“Mustafa al-Imam played a significant role in the 2012 Benghazi attack, one that ultimately claimed American lives,” said Assistant Director in Charge Sweeney. “While nothing will ever change the outcome of this horrific event, today’s verdict is a reminder that the safety of Americans — whether at home or abroad, civilian or otherwise — will always be our top priority. If you commit an act of terrorism, we will find you and bring you to justice.”

The trial began with opening statements on May 8, 2019, before a jury in the courtroom of the Honorable Judge Christopher R. Cooper of the U.S. District Court for the District of Columbia. Over the next four weeks, the government presented testimony from 27 witnesses. The witnesses included those who were wounded in the attack, as well as others who survived the attacks.