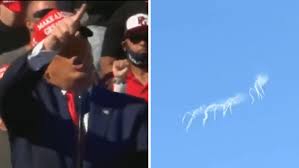 BULLHEAD CITY, AZ — A F-16 fighter jet intercepted a plane that was flying in a restricted area during President Trump’s rally in Bullhead City Wednesday.

The following is a statement from North American Aerospace Defense Command:

Secret Service agents ran toward the President as the event unfolded but ultimately did not go on stage.

Officials did not say if the pilot intended to cause the President harm.

The incident was partially captured on video.

MOMENTS AGO: Fighter jet flies over Trump rally in Arizona and appears to fire off flares; crowd chants "USA!" pic.twitter.com/8znBkEJrcb