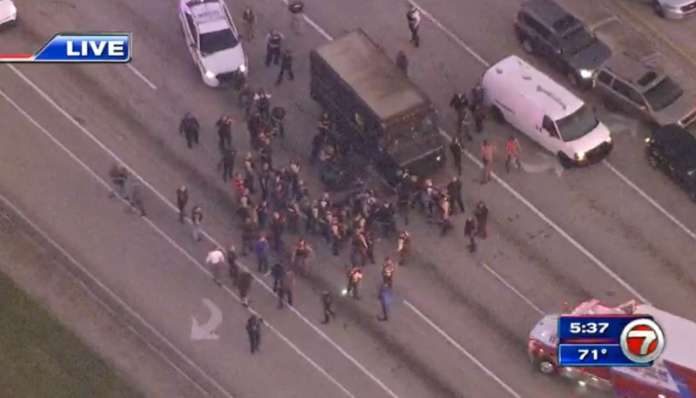 Ft. Lauderdale — (SCROLL DOWN FOR VIDEO) — A high-speed pursuit of a carjacked UPS truck in South Florida streets ended Thursday afternoon in Miramar with an exchange of gunfire–leaving four people dead.

Authorities said it began in Coral Gables after an armed robbery and shooting that took place at the Regent Jeweler’s located at 386 Miracle Mile.

Reports indicated that the suspects inside the truck were shooting at police.

The chase ended in a wild shootout, as seen in the video below. When the smoke cleared, two suspects, the UPS driver and a bystander were all killed, according to CBS Miami. It was unclear if the gunfire by police cause all fatalities.

UPS has released a statement following the incident.

“We are trying to learn about the status of our personnel and are concerned about their safety,” a company spokesperson said. “We appreciate law enforcement’s service and will cooperate with them to bring the individuals to justice who put our people in harm’s way.”

The FBI and ATF are assisting in the investigation.