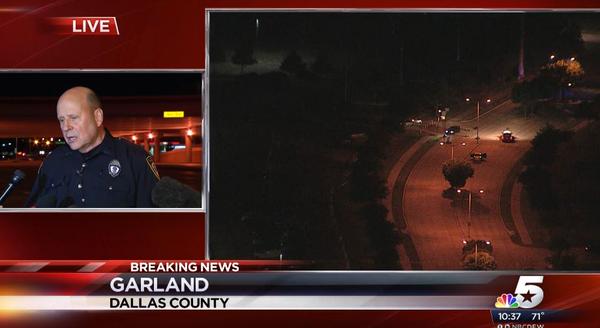 DALLAS, Texas — A shooting occurred outside the American Freedom Defense Initiative at the Curtis Culwell Center in Garland, Texas.

A School Resource Officer has been shot and two suspects are down. The gunmen pulled up in a car, got out and started shooting. Officers returned fire, killing the suspects.

The center was hosting a Muhammad art contest. Reports say the gunmen had explosives on them.

From Breitbart: “Suspects had two AK-47’s according to police on the scene. The officer has been transported to the hospital. The suspects are still on the ground at the scene. They are not moving and are not being touched at this time until a bomb squad checks out their bodies.”

SWAT Officers were on scene and attendees were rushed to a safe room. Nearby businesses were evacuated.

Garland Police spokesman Joe Harn told ABC News that the FBI was also on the scene and was involved in the investigation.

The injured Officer, 58-year-old Bruce Joiner was taken to a local hospital and was released nearly two hours later, according to NBC-DFW.

A tweet posted before the shooting appears to be from one of the shooters, this is not confirmed:

The group claims the event is an effort to stand up against violent intimidation. The event was organized after a pro-Islamic event was held in January.

Many people consider depictions of the Prophet as offensive. There was a heavy police presence all afternoon outside of the center.

Organizers spent nearly $10,000 on extra security for the event, police said. Video from the scene after lockdown:

From the city of Garland’s Facebook page: As today’s Muhammad Art Exhibit event at the Curtis Culwell Center was coming to an end, two males drove up to the front of the building in a car. Both males were armed and began shooting at a Garland ISD security officer. The GISD security officer’s injuries are not life-threatening. Garland Police officers engaged the gunmen, who were both shot and killed. Police suspect the vehicle may contain an incendiary device and the bomb squad is on the scene. The surrounding businesses including Academy Sports, Walmart and Sam’s are being evacuated. Event participants are also being evacuated from the Curtis Culwell Center for their safety.

Dr. Bilal Rana, President of Ahmadiyya Muslim Youth Association released the following statement: “On behalf of the Ahmadiyya Muslim Youth Association – the largest Muslim youth group in the country – we stand by our fellow Americans in shock and horror at today’s shooting. While we wait for investigators to tell us more about the shooters, we wholly condemn any such acts of violence and find them completely unjustifiable. Our faith calls us to engage in dialogue. So we condemn any use of violence to intimidate anyone.”

Earlier this year, 12 people were killed by terrorists in an attack against the Paris office of the satirical newspaper Charlie Hebdo, which had lampooned Islam and other religions and used depictions of Muhammad.

Breaking911 is monitoring the situation and will give further updates as they break.