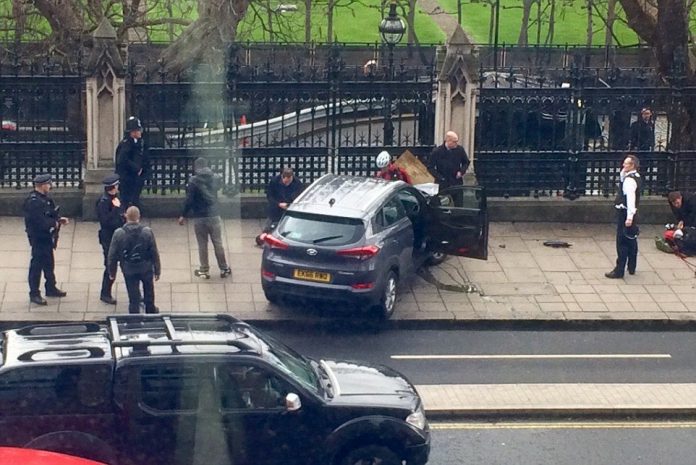 Parliament is on lockdown after gunshots were heard outside the Palace of Westminster.

The attacker, who was driving a grey Hyundai i40, hit pedestrians on the pavement before crashing his vehicle into railings outside Parliament and then dashed through the gates there and stabbed a policeman.

Four people have died and several others have ‘catastrophic’ injuries, according to a doctor at the scene.

President Donald Trump said he has been briefed on the terror attack in London outside the Houses of Parliament today.

“Just getting an update on London,” Trump said, entering a meeting in the White House’s Roosevelt Room.

Three bodies were visible on the floor and the Palace was placed on lock down.

The Prime Minister was said to have been voting in the lobby and was escorted out of the building by a plain clothes policeman and put in a car.

An air ambulance was seen landing in Parliament Square shortly after the two incidents.

The House of Commons leader said that a police officer was shot, the attacker was then swiftly shot by armed police.

scotland Yard said the attack was being treated “as a terrorist incident until we know otherwise”.