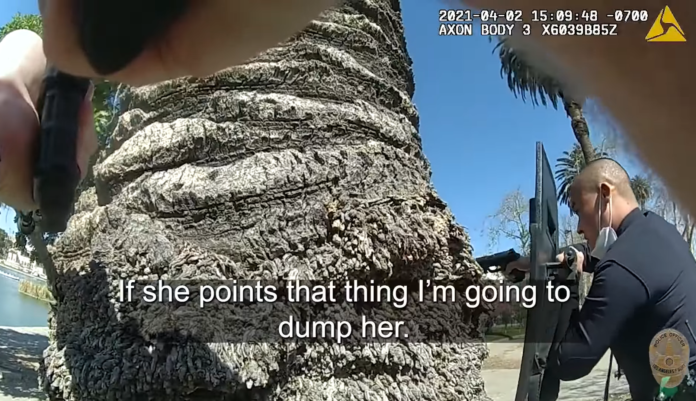 On April 2, 2021, at approximately 2:57​ p.m., Rampart Patrol Division officers responded to a report of a female inside MacArthur Park firing a handgun into the air. A Police Air Unit arrived overhead. The suspect (later identified as Michele Renee Lariccia) pointed the handgun at the Air Unit before continuing to walk through the park. Rampart officers arrived on scene and tracked the suspect, as she walked along the shoreline of the lake. The officers attempted to communicate with the suspect for several minutes, giving her commands to drop the handgun. Despite the commands, the suspect raised the handgun and pointed it at officers, resulting in an Officer-Involved Shooting.

After being struck by gunfire, the suspect dropped her handgun and entered the lake, where she remained for approximately two hours and thirty- five minutes. The suspect eventually exited the lake and was taken into custody.

The suspect was transported by rescue ambulance to a local hospital, where she underwent surgery for gunshot wounds. The suspect is expected to survive and is currently listed in stable condition.

A loaded firearm was recovered at scene.

No officers were injured during this incident.