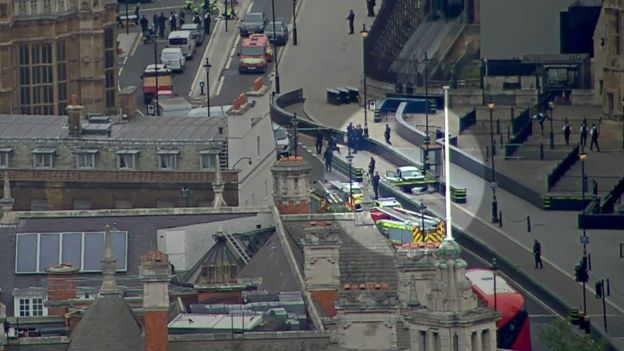 Counter Terrorism officers are carrying out searches at three addresses in the Midlands as part of their ongoing investigation into a collision in Westminster this morning, during which three people were injured.

On Tuesday morning, a silver Ford Fiesta collided with cyclists and pedestrians, before crashing into barriers outside the Houses of Parliament.

A man and a woman were taken to hospital with non-life threatening injuries and have now both been discharged. Another man was also treated at the scene.

The driver of the car, a 29-year-old man, who is a UK national, was arrested at the scene by armed officers. He was arrested on suspicion of preparation of a terrorist act.

He was taken to a south London police station where he currently remains in police custody.

At the time of the arrest, there was nobody else in the vehicle, which remains at the scene and has been searched. No weapons have been recovered at this stage.

Given that it appears to have been a deliberate act, the method used and the iconic location, it is being treated as a terrorist incident and the investigation is being led by officers from the Met’s Counter Terrorism Command.

At this early stage, there is no intelligence of further danger to Londoners or the rest of the UK in connection with this incident.

Detectives have established that the Fiesta, registration number FL10 CWZ and which is privately owned, travelled from Birmingham to London late on Monday night (13 August), arriving in the London area just after midnight (14 August).

Officers are appealing to anyone who may have seen the vehicle or the driver either in the Tottenham Court Road area in the early hours of this morning (14 August), or in the Westminster area from 06:00hrs today, to contact them on 0800 789 321.