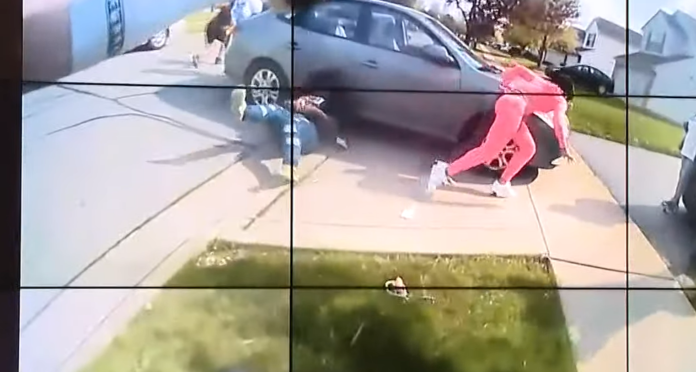 COLUMBUS, Ohio – A teenage girl is dead after being shot by a police officer Tuesday afternoon in southeast Columbus.

Officers were called to the 3100 block of Legion Lane, north of Chatterton Road, just after 4:30 p.m. for an attempted stabbing, according to the Columbus Dispatch.

Within moments of officers arriving, an officer-involved shooting occurred. Family at the scene told 10TV that the victim is 15-year-old Makiah Bryant.

Paula Bryant tells me her 16 year-old daughter Ma’Khia Bryant was an honor roll student and a sweet child. Ma’Khia was shot and killed by a @ColumbusPolice on Legion Lane at 4:30p today. pic.twitter.com/0FfbQVEgSD

Family tells us the person who was fatally shot by @ColumbusPolice was 15 year-old Makiah Bryant. They say she called cops for help because girls were fighting outside her house. pic.twitter.com/g2eayG2MHW

The shooting happened just as the verdict was being announced in the murder trial of former Minneapolis police officer Derek Chauvin.

The girl who was shot was taken to Mount Carmel East in critical condition. Police confirmed the person died at the hospital.

“This afternoon a young woman tragically lost her life,” Mayor Andrew Ginther said. “We do not know all of the details. There is body-worn camera footage of the incident. We are working to review it as soon as possible. BCI is on the scene conducting an independent investigation — as they do with all CPD-involved shootings. We will share information that we can as soon as it becomes available. I’m asking for residents to remain calm and allow BCI to gather the facts.”

A 15 year old girl JUST got shot 4 times in Columbus Ohio by this police officer. It hasn’t even been a full 24 hrs & y’all already continuing with this shit 🤦🏽‍♀️💔 he needs to be next!! pic.twitter.com/1L284IciHD

More people asking police “were they wearing body cameras?” This as police are investigating an officer involved shooting on Legion Lane. One person died around 5:20 pm pic.twitter.com/ri7lNGfHup

Protestors have started gathering in the area:

.@MoMCC_ and others are starting to show up with signs to Legion Drive, where @ColumbusPolice confirm one person is dead after being shot by an officer. pic.twitter.com/lXo1pwdTYL

The Ohio Bureau of Criminal Investigation is currently on the scene for investigation.