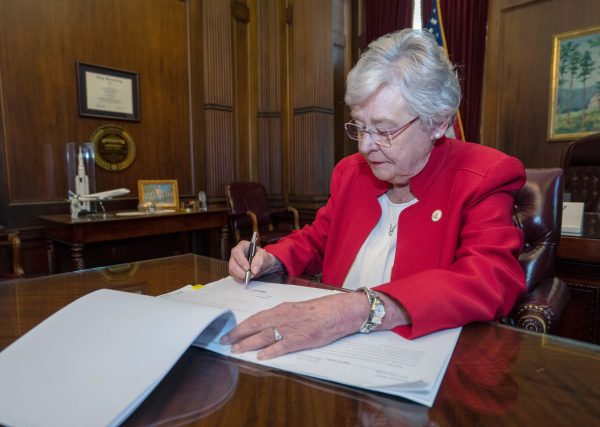 The legislation bans all abortions. The only exception is to save a woman’s life. The bill could also punish doctors who perform abortions with life in prison.

Upon signing the bill, Governor Ivey released the following statement:

“Today, I signed into law the Alabama Human Life Protection Act, a bill that was approved by overwhelming majorities in both chambers of the Legislature. To the bill’s many supporters, this legislation stands as a powerful testament to Alabamians’ deeply held belief that every life is precious and that every life is a sacred gift from God.

To all Alabamians, I assure you that we will continue to follow the rule of law.

In all meaningful respects, this bill closely resembles an abortion ban that has been a part of Alabama law for well over 100 years. As today’s bill itself recognizes, that longstanding abortion law has been rendered “unenforceable as a result of the U.S. Supreme Court decision in Roe v. Wade.”

No matter one’s personal view on abortion, we can all recognize that, at least for the short term, this bill may similarly be unenforceable. As citizens of this great country, we must always respect the authority of the U.S. Supreme Court even when we disagree with their decisions. Many Americans, myself included, disagreed when Roe v. Wade was handed down in 1973. The sponsors of this bill believe that it is time, once again, for the U.S. Supreme Court to revisit this important matter, and they believe this act may bring about the best opportunity for this to occur.

I want to commend the bill sponsors, Rep. Terri Collins and Sen. Clyde Chambliss, for their strong leadership on this important issue.

For the remainder of this session, I now urge all members of the Alabama Legislature to continue seeking the best ways possible to foster a better Alabama in all regards, from education to public safety. We must give every person the best chance for a quality life and a promising future.”