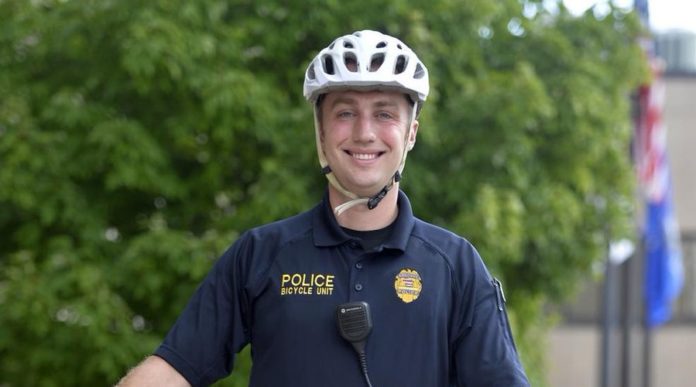 The Wisconsin officer who shot Jacob Blake seven times in the back has been identified as Officer Rusten Sheskey—a seven-year veteran of the Kenosha Police Department.

The Wisconsin Division of Criminal Investigation (DCI) issued this statement:

Kenosha Police Department officers were dispatched to a residence in the 2800 block of 40th Street after a female caller reported that her boyfriend was present and was not supposed to be on the premises.

During the incident, officers attempted to arrest Jacob S. Blake, age 29. Law enforcement deployed a taser to attempt to stop Mr. Blake, however the taser was not successful in stopping Mr. Blake. Mr. Blake walked around his vehicle, opened the driver’s side door, and leaned forward. While holding onto Mr. Blake’s shirt, Officer Rusten Sheskey fired his service weapon 7 times. Officer Sheskey fired the weapon into Mr. Blake’s back. No other officer fired their weapon. Kenosha Police Department does not have body cameras, therefore the officers were not wearing body cameras.

During the investigation following the initial incident, Mr. Blake admitted that he had a knife in his possession. DCI agents recovered a knife from the driver’s side floorboard of Mr. Blake’s vehicle. A search of the vehicle located no additional weapons.

DCI is continuing to review evidence and determine the facts of this incident and will turn over investigative reports to a prosecutor following a complete and thorough investigation.

Wisconsin Attorney General Josh Kaul today released the following statement regarding the shooting that occurred in Kenosha on the evening of August 25, 2020:

“The violence and destruction that took place in Kenosha last night was despicable. While the two people who were killed and the person who was injured by gunfire have not yet been identified, we are thinking of their destroyed futures and their friends and families that must live with this overwhelming grief.

Kenosha residents deserve the opportunity to grieve, come together, peacefully protest, call for change, and heal. The heavily armed vigilantes, arsonists, and other opportunists who have come to Kenosha to attempt to spur chaos have interfered with that and caused drastic harm to people. If those engaging in violence and destruction of property believe they are furthering some broader goal, they are wrong. They should leave Kenosha.

Times like this call for our leaders to unify people. We must come together, in good faith, to work toward positive change. Sowing division can be deadly, and we must condemn those—especially those at the highest level of government—who seek to do so.

While those who seek to divide people may have the biggest megaphones and attract the most attention, they do not speak for the vast majority of us who seek greater unity, common ground, and justice.”