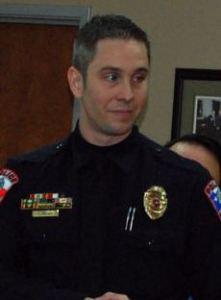 HUTTO, Texas — A Hutto police officer was killed this morning, according to the department.

The Texas Department of Public Safety said they responded to the scene to assist in a foot pursuit. The Hutto Police Department said it responded to an officer-involved injury during the 10 a.m. hour.

The Officer was intentionally run over, according to reports. He was identified as Sgt. Chris Kelly.

From KXAN: — “Kelley served on Hutto’s police force since July 2008, according to the City of Hutto website.

Kelley held an intermediate peace officer license through the Texas Commission on Law Enforcement Standards and Education. He also held a special investigator certification; he was a law enforcement physical fitness instructor and a certified field-sobriety practitioner. Kelley was also in charge of handing the registration of sex offenders within the city limits, according the city government’s website.

The incident happened near the intersection of FM 1660 and Meadow Lark Lane.

Police have scheduled a news conference for 3:15 p.m. at the Williamson County Emergency Services Office.

Check back for more details.