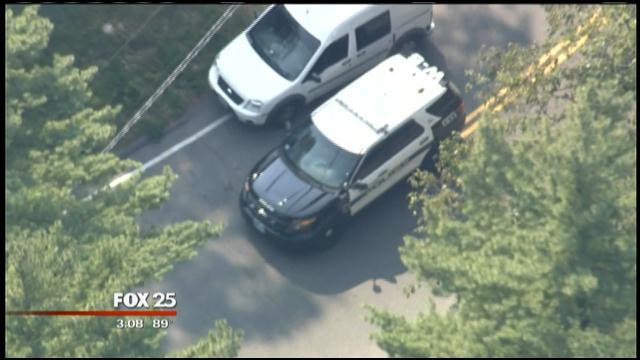 Massachusetts State Police and several local police departments are investigating shots fired into a Millis Police Department cruiser at approximately 3 p.m. on Forest Road in that town. The cruiser was struck by gunfire, then crashed and caught on fire.

State Police are not aware of any injuries at this time. If that changes we will update this post.

Preliminary investigation indicates the shots were fired from a dark colored — possibly maroon — pickup truck. The suspect vehicle fled the scene after the shooting. Preliminary reports describe the suspect as a white male.

State Police patrols from Troops H and C have responded to assist in the search for the suspect.  A helicopter from our Air Wing has also been deployed. Additionally, State Police detectives, crime scene technicians, ballistics technicians, and fire investigators are en route to the scene to assist.

No further information is available at this time. -MSP