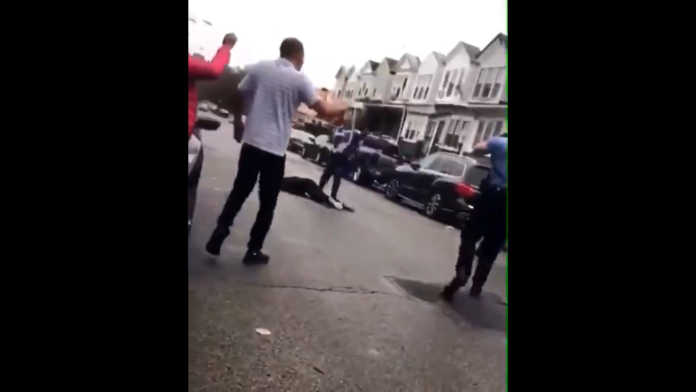 PHILADELPHIA — Philadelphia Police fatally shot a man armed with a knife on the city’s Westside Monday.

Police say they responded to the location for a domestic incident when they encountered the suspect. The unidentified man was given multiple commands to drop the knife but refused, police say. As he continued to walk toward the officers, he was shot multiple times. The incident was captured on video.

A crowd of protesters has gathered at the scene. pic.twitter.com/GTzeUjw5IE

After the incident, a group of angry residents gathered at the scene to protest–some saying the officers involved should had used a taser and not live rounds.

Emotions are running high among a growing crowd of neighbors, many of whom witnessed the officer involved shooting. @PPDCommish spoke with some of them on scene. Full video on my Facebook page @6abc https://t.co/qCAYVqN37a pic.twitter.com/IVJ40nCxB2

I’m in the Cobbs Creek neighborhood of Philadelphia, where police shot a Black man less than an hour ago. Witnesses say he had a knife but was not charging police. Numerous shell casings are in the street. Neighbors are irate, crying, yelling at police. pic.twitter.com/oWtIJTDdUw

“The Philadelphia District Attorney’s Office takes its obligation to try to be fair and to seek evenhanded justice seriously. The DAO Special Investigations Unit responded to today’s fatal shooting of a civilian by police shortly after it occurred, and has been on scene with other DAO personnel since that time investigating, as we do jointly with the PPD Officer-Involved Shooting Investigation Unit, in shootings and fatalities by other means involving police. We intend to go where the facts and law lead us and to do so carefully, without rushing to judgment and without bias of any kind.

“People who witnessed this incident or have information they believe to be relevant to this investigation are encouraged to contact the District Attorney’s Office Special Investigations Unit hotline: 215–686–9608.”

“In the hours and days following this shooting, we ask Philadelphians to come together to uphold people’s freedom to express themselves peacefully and to reject violence of any kind.”