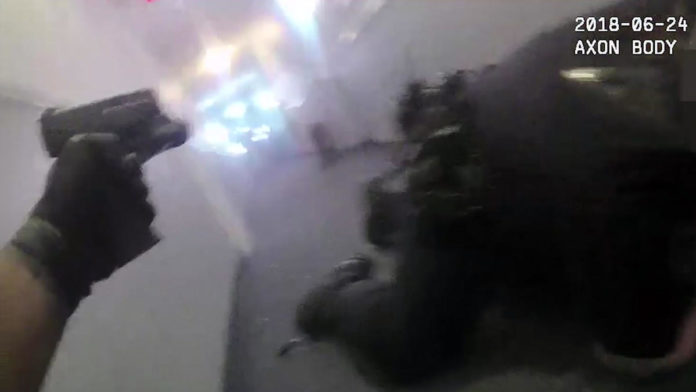 CALIFORNIA — (Scroll Down For Video) — The District Attorney’s office has completed its review of a violent incident last year in which two San Diego police officers were shot, officers were forced to scramble for cover and return fire, and the suspect eventually took his own life. On June 23, 2018, San Diego Police officers were called to a condominium unit in the College area to investigate a violent disturbance.

Officers smelled smoke coming from the condo and called firefighters to assess the situation. Police knocked on the door for more than 20 minutes but got no response. To ensure there was no fire danger, fire personnel forced entry into the home. Joe Darwish, 28, immediately opened fire on police and fire officials with a large caliber weapon, striking one police officer in the back. Two officers returned fire while backing away from the residence, providing cover for the wounded officer. The officer who had been shot fell onto his back and was initially unable to move. After several seconds, he managed to roll onto his stomach and was able to crawl down the hallway in an attempt to get out of the line of fire. During the ensuing gun battle, a second police officer was shot by Darwish.

Darwish fired at least twenty-two shots at police. Eventually, the shooting stopped and Darwish was found dead from a self-inflicted gunshot wound to his head. He had also been struck in the arm and face from one of the officers’ shotgun fire. The San Diego Medical Examiner ruled Darwish’s death a suicide.

“This harrowing incident shows just how quickly a routine call for service can turn deadly for police officers who suddenly found themselves in the line of fire, trying to protect their wounded fellow officers and keep the shooter from endangering members of the public,” said District Attorney Summer Stephan. “It’s a tribute to these officers’ bravery and quick response that the gunman didn’t injure more people or kill the officers and firefighters involved.”

Darwish was wearing a bullet-proof vest and was armed with a homemade assault weapon and a homemade 9 mm semi-automatic pistol. Neither weapon had a serial number and the guns were not registered. After a thorough review, the District Attorney’s Office determined officers were justified in using deadly force to defend against Darwish’s attempts to kill them and others. Both officers who were shot survived their injuries.