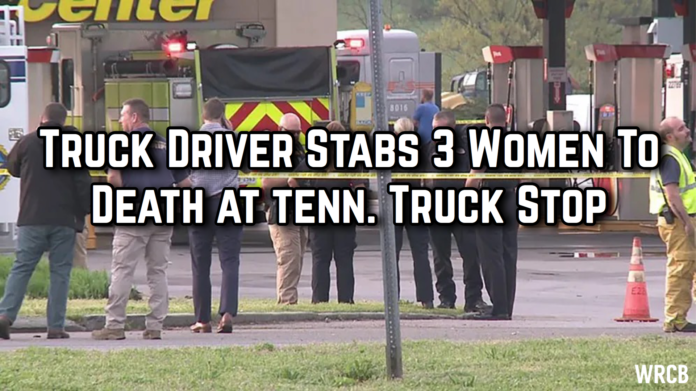 A truck driver fatally stabbed three people and wounded another at a Knoxville truck stop Tuesday morning. He was later shot dead by deputies.

Just before 7:00 this morning, the Knox County Sheriff’s Office received a report of an incident at the Pilot Travel Center along Strawberry Plains Pike.

Upon arrival, officers observed at least one person with stab wounds outside of the store. A man, armed with a knife and identified by witnesses as the suspect, was also observed in the parking lot. Officers confronted the individual who refused to drop the weapon. At some point during the encounter, one of the officers fired shots, striking the man. He was pronounced dead at the scene.

Four victims were stabbed during the incident. Three were pronounced dead at the scene. The fourth was transported to a local hospital for treatment.

Pilot CEO Jimmy Haslam released a statement regarding the incident.

“Today is a difficult day for the Pilot Company family. We are devastated to confirm the loss of three team members and the injury of a guest after an act of violence at our Strawberry Plains, Tennessee, location this morning. It is with heavy hearts that we extend our deepest sympathy to the families and loved ones of the victims. We are providing support and counseling to the families and our team. We are working closely with local authorities. Please keep these families in your thoughts and prayers.”

The suspect was identified as 33-year-old Idris Abdus-Salaam, a trucker. A motive for the attack remains under investigation.