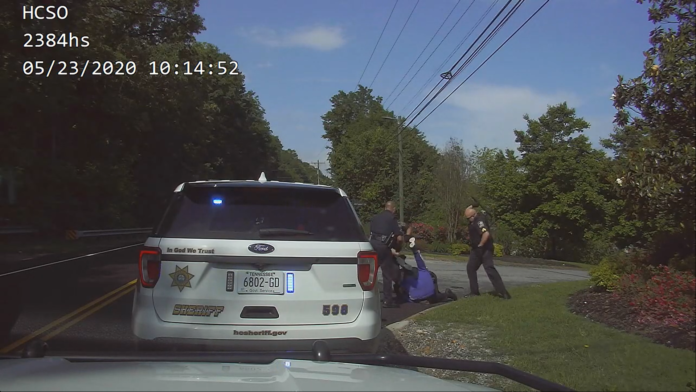 Chattanooga, Tenn. — (Scroll Down For Video) — Hamilton County District Attorney General Neal Pinkston has requested the Tennessee Bureau of Investigation (TBI) investigate an incident that occurred in Hamilton County on May 23, 2020. On that date, several deputies with the Hamilton County Sheriff’s Department arrested Reginald Arrington Jr. on the following charges: resisting arrest, simple assault on police, criminal impersonation, pedestrian in roadway and four counts of aggravated assault on police.

During the arrest process, the officers and Arrington got into a physical altercation. General Pinkston said the bodycam and dashcam footage from the officers caused enough concern to warrant an investigation. “I have not made a final determination on anything related to this case,” said General Pinkston, “but what I saw in the videos was troubling. That’s why I’m requesting a thorough investigation to ascertain whether or not excessive force was used in this incident.” The officers involved in this incident are white.

Arrington, who is from Ohio, is African American. General Pinkston added that all of the charges against Arrington were dropped today.

“Earlier this morning, Hamilton County District Attorney General Neil Pinkston released a video involving my deputies and Reginald Arrington, Jr., The video depicts my deputies’ actions in response to Arrington’s resisting arrest. By releasing this video, along with dismissing Arrington’s charges, General Pinkston essentially removed my deputies’ ability to offer direct testimony under oath pertaining to their actions and their training utilized in this incident.

By hastily dismissing charges and releasing this video without allowing a legal, preliminary probable cause hearing to take place, I feel General Pinkston’s actions will improperly influence and sensationalize the events of this incident to the public without allowing the legal process to effectively take place. Effectively, what General Pinkston has chosen to do is indict my deputies in the court of public opinion prior to facts being presented in a court of law.

Many of our citizens will view this video of Arrington’s resisting lawful arrest and may share concerns over how my deputies responded. Upon arrest, Arrington became combative at which time my deputies utilized compliance techniques, including the use of batons to eventually gain compliance. I ask our community to not rush to judgment based on the contents of the video, but allow for the investigation to take place at which time the actions of both my deputies and those of Arrington will be thoroughly reviewed. The dash cam video in question was taken internally by our personnel at the scene.

Based upon preliminary review of the video, I am not placing any of the deputies involved in this incident on administrative leave. However, to ensure this event is thoroughly reviewed, I have ordered an Administrative Review to be conducted to ensure Arrington’s treatment was justified and our policies and procedures were followed.

We are a nation of law and order and in order to remain so, it is imperative we allow and encourage the legal process to take place. This includes allowing for preliminary probable cause hearings to take place so all sides can be heard. As always, we welcome an outside review and will cooperate and offer any evidence necessary to seek a legal and appropriate resolution.

As sheriff, it has always been my intention that this agency stand firm and remain transparent even in the harshest light of public scrutiny. However, I cannot sit back and remain idle while my deputies have their right to be heard infringed upon.”

General Pinkston has also referred the matter to the Department of Justice for possible investigation, and notified the general counsel for Tennessee Governor Bill Lee.