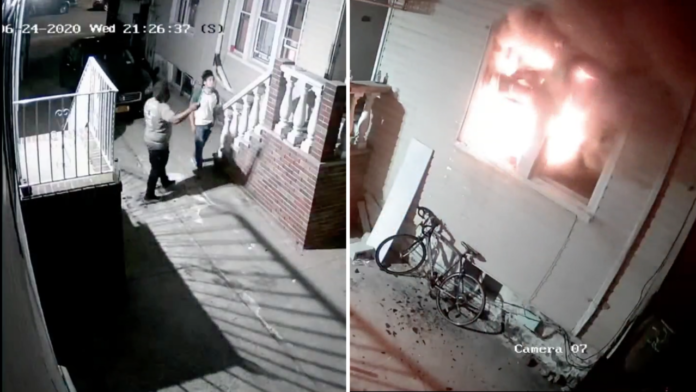 FDNY Commissioner Daniel A. Nigro announced today that Fire Marshals arrested Damien Bend, 36, for arson in connection with a house fire ignited by illegal fireworks on June 24, 2020. The incident was captured by cameras in the vicinity of the premises.

“Illegal fireworks pose significant dangers to the safety of New Yorkers and their property,” said Commissioner Nigro. “Our Fire Marshals will continue to actively enforce the laws relating to illegal possession and sales of fireworks in New York City.”

On June 24, 2020, FDNY responded to 1709 East 51 Street, Brooklyn for reports of a fire on the first floor of a 2 ½ story home. The incident took 12 units and 60 members to bring under control. Fire Marshals subsequently conducted an investigation and determined that the fire was incendiary. Video footage obtained of the incident shows Bend igniting pyrotechnics in the driveway when a burst from one of them entered an open window on the first floor. Bend continued to set off the remaining fireworks before entering his house to retrieve more.

Brooklyn Man, 36, Arrested After Burning Down His Own House While Setting Off Illegal Fireworks In His Driveway pic.twitter.com/2eih6gEJP5

Bend is charged with arson in the fourth degree and will be prosecuted by the Brooklyn District Attorney’s office.

In the last nine days, Fire Marshals have arrested 17 people and confiscated approximately $36,700 worth of illegal fireworks. Fireworks are illegal in New York City. FDNY urges all New Yorkers to call 311 to anonymously report the use, delivery, or sale of fireworks.