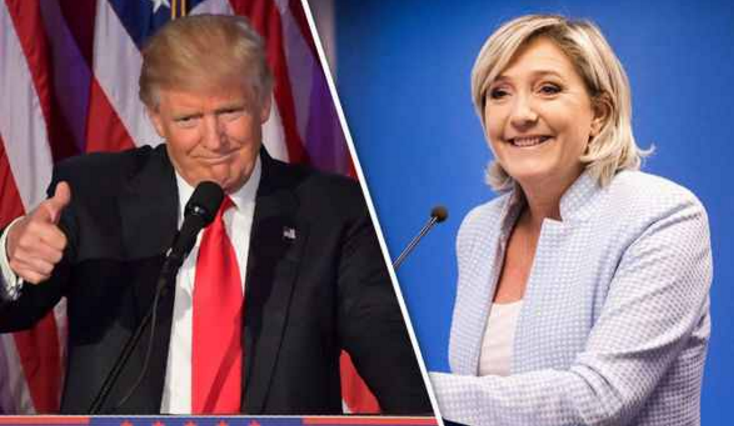 The tidal wave of populist outrage coursing through the West has found an unsurprising cheerleader in France’s Le Pen, the increasingly popular leader of the country’s National Front. In the aftermath of the U.S. presidential election, Le Pen thinks she could write the next chapter in a global revolt against the status quo.

France’s presidential election is less than six months away. Once confined to the political fringe – a poster girl for Europe’s radical right – Le Pen is clearly preparing for a boost from Trump’s tail wind. She may get it. In regional elections in December, a month after the terrorist attacks across Paris, she won nearly 30 percent of voters in the first round. And that was before Brexit, the July attack in Nice, the drama over the Calais migrant camp and, now, the U.S. election – all of which have played to her advantage.

As in Britain and the United States, a fierce anti-immigrant rhetoric has swept through a France still reeling from terrorist violence. It is largely directed at the historic wave of migration that has brought more than 1 million people from the Middle East and Africa to Europe in the past two years. Thousands of them ended up in camps on the northern coast of France, and when two newcomers took part in the Islamic State-orchestrated attacks on Paris last November, the migrants came to represent a national-security threat – and an entire religion – portrayed as a threat to the French way of life.

Since the Paris attacks, a palpable Islamophobia has emerged in France. Over the summer, there was the uproar over the “burkini” swimsuit, and now, after the closure of the Calais migrant camp, there is widespread anxiety over the other camps that have emerged across the country – including three within Paris. Prominent French intellectuals have now normalized the idea of a Muslim “invasion,” and even François Hollande, the Socialist president, has said that France has “a problem with Islam.” As it was in the Brexit campaign and the U.S. election, the theme of a national identity under siege is already the centerpiece of France’s search for its next president.

And no one screams louder about national identity than Le Pen, who has promised to make France “great again” in the same nostalgic appeal that Trump successfully pitched to U.S. voters. “We, too, are keen on winning back our freedom,” she said in September. “We want a France that is the master of its own laws and currency and the guardian of its borders.”

Le Pen was probably the first foreign politician to herald Trump’s victory, tweeting her congratulations before a winner had been officially announced. Then, hours later, she took to the stage at her party’s headquarters outside Paris, presenting herself as the torch bearer of a long-brewing international mission to disrupt the established order.

She warned political leaders – inside and outside France – to watch their backs. “The political and media elites that were heavily chastised this morning can no longer ignore it,” she proclaimed Wednesday, smiling for the cameras.

“The French referendum in 2005, the Greek one in 2015, the recent electoral successes of patriots in different European countries, the massive vote by the British in favor of Brexit and now Donald Trump – all are democratic choices that bury the old order and steppingstones to building tomorrow’s world,” she said.

But could she win? Most analysts still say there is little chance that the National Front could emerge on top in France’s 2017 elections – despite the staggering unpopularity of Hollande.

For one, Le Pen and her populist platform will not be the only option for voters on the right, who could also support Alain Juppé, the grandfatherly mayor of Bordeaux, or Nicolas Sarkozy, the “bling bling” former French president with the supermodel wife and a penchant for Islamophobia that has come to rival Le Pen’s.

For another, despite Le Pen’s best efforts to improve its image, the National Front – which shares much of the nationalism, protectionism and pro-Russian sensibilities of the Trump campaign – has an unfortunate history of anti-Semitism that many voters have a hard time overlooking, even after their leader’s recent attempts to “de-demonize” the party.

“I believe that she’s played this well,” said Francis Kalifat, president of the Representative Council of Jewish Institutions of France, the country’s largest Jewish advocacy organization. “But in reality, nothing has changed. It remains a xenophobic party and a party that we share no values with.”

In a country highly sensitive to the memory of its collaboration in the Holocaust, even the allegation of anti-Semitism can torpedo a political future, said Nonna Mayer, a political scientist at Paris’s Sciences Po school. “It remains a major taboo in our history.”

For many, the National Front is a synonym for that taboo. Le Pen’s father, Jean-Marie Le Pen, the 88-year-old founder of the party from whom Marine Le Pen is currently estranged, once referred to the Nazi concentration camps as a “detail of history,” a remark that led a French court to declare him guilty of “questioning a crime against humanity” and to fine him nearly $35,000.

So high is the instinctive French distaste for the National Front that, on the one occasion when the party actually made it to the final round of the presidential elections, in 2002, both the right and the left rallied around Jacques Chirac, a centrist conservative, who then trounced Jean-Marie Le Pen in a landslide victory. The view in Paris is that much the same would happen if Marine Le Pen ran against Alain Juppé, currently favored to win France’s conservative primary later this month.

But depending on the results of the primary, Le Pen could be facing off against Sarkozy instead, which experts say would present a scenario where a National Front victory might be possible, largely because Sarkozy’s hard line on migrants and Muslims has already alienated the moderate voters he would need to fight off Le Pen.

“He has used a very similar rhetoric to Le Pen herself,” said Cécile Alduy, the author of a 2015 study of Le Pen’s reliance on language, referring to the former president’s recent turn toward Islamophobia to steal voters away from the National Front.

That, added Gérard Grunberg, a political scientist at Sciences Po, probably would hurt rather than help Sarkozy at the ballot box. “Many voters on the left and right won’t support him against Le Pen,” Grunberg said.

Before the presidential elections next year, France will remain in a state of anxiety over the possibility of future terrorist attacks and over the migrant crisis, in a country where the political establishment has been ridiculed for responses too little and too late.

Until the next president is chosen, one voice in particular is likely to be louder than its challengers, decrying the sitting government, political elites and the European Union itself to an audience of angry and world-weary voters.

“For the moment, there is very little chance that Marine Le Pen would win,” Mayer of Sciences Po said. “But we should never say never, as Brexit and Trump show.”